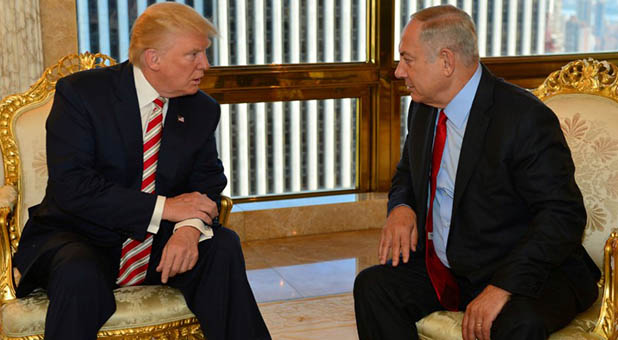 President Donald Trump and Israeli Prime Minister Benjamin Netanyahu have a lot to discuss when they meet next week. (Reuters photo)

Dr. Mike Evans: Trump and Netanyahu Have a Lot to Discuss
2/10/2017 DR. MICHAEL D. EVANS  CHARISMA NEWS
Prime Minister Benjamin Netanyahu and President Donald Trump will soon hold their first meeting. What is the purpose? The Jerusalem Embassy Act? Iran? Syria? Truthfully, the answer is, “All of the above.” Most importantly, it is to partner to wage a war on terrorists in the Middle East.
President Trump has neither a desire to engage in nation-building in the region nor to fight a traditional war. He was adamantly opposed to the Iraq war. The new wars of the twenty-first century are proxy, economic, media and ideological.
Israel is the undisputed proxy champion of the world. Radical Islam has labeled Israel, “The Little Satan.” America has been crowned, “The Big Satan.” When Menachem Begin was prime minister of Israel, he showed me a strategic plan he was to present to the president of the United States. Israel’s conclusion was that America could not effectively win wars in the Middle East. Wars were fought over such a lengthy period of time. By the time the U.S. reached the region to fight a war, it had reached an end.
The reality is that during the Communist era, Israel, a U.S. proxy, had strategically deterred Communists in the Middle East. Now, Israel will become a proxy against radical Islam. There is no information operation in the region that compares to Israeli intelligence. The nation has eyes and ears on the ground in each Arab country.
Iran is ground zero for world terror. Its proxies are destabilizing the entire Middle East. It is in both Trump’s and Netanyahu’s crosshairs. Israel is incapable of effectively destroying Iran’s nuclear reactors alone, which is the reason Netanyahu never moved forward with an operation.
Israel has always believed that with the U.S. as a partner, not only could the reactors be neutralized but Iran could be pushed into bankruptcy. That move would ultimately guarantee a regime change such as the one that took place under the Shah of Iran.
Syria has become a snake-infested swamp filled with the vilest terrorists in the world. Both the Syrian and Iranian matters can be resolved, but it will take the support of one global ally besides the U.S. and Israel. That will be Russia, which explains Donald Trump’s refusal to alienate Vladimir Putin.
Not only has Prime Minister Netanyahu scored his greatest victory with the Trump presidency, but so has Trump with Netanyahu. Israel’s finest days are yet to come with the Netanyahu/Trump alliance. Ultimately, Mr. Trump will have a naval base in the Port of Haifa, where U.S. troops can be protected and special ops can move in and out to decapitate radical Islam.

Dr. Michael D. Evans is an award-winning journalist who has served as a confidant to multiple Prime Ministers of Israel and leaders in the Middle East for more than two decades. He is considered one of the world’s leading experts on Israel and the Middle East, and he is one of the most sought-after speakers on the subject.
Leaders are readers! Subscribe now and get 3 magazines for the price of 1. Get Ministry Today, Charisma and SpiritLed Woman all for $24. YES – Sign me up!
3 Reasons Why you should read Life in the Spirit. 1) Get to know the Holy Spirit. 2) Learn to enter God’s presence 3) Hear God’s voice clearly! Click Here to draw closer to God!
Love For His People, Inc. founded in 2010 by Steve & Laurie Martin. Charlotte, NC USA