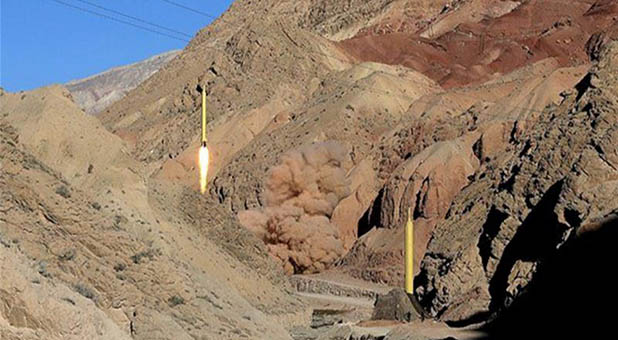 2/7/2017 BOB ESCHLIMAN  CHARISMA NEWS
According to a recent report from Iran’s state-operated Fars News Agency, a new ballistic missile just tested by the Islamic Republic can strike Tel Aviv, the seat of Israel’s government, with just seven minutes’ notice.
Mojtaba Zonour, a former adviser to the Iranian Supreme Leader’s Representative at the Islamic Revolution Guards Corps, made the claim as the war of words between Tehran and Washington was ramped up over the weekend. He also threatened a U.S. military installation in Bahrain.
“The US army’s fifth fleet has occupied a part of Bahrain, and the enemy’s farthest military base is in the Indian Ocean, but these points are all within the range of Iran’s missile systems, and they will be razed to the ground if the enemy makes a mistake,” he said. “And only 7 minutes is needed for the Iranian missile to hit Tel Aviv.”
President Donald Trump responded to the threats and additional ballistic missile tests with the following comment on Twitter:
Iran is playing with fire—they don’t appreciate how “kind” President Obama was to them. Not me!
Commander of the IRGC Aerospace Force Brigadier General Amir Ali Hajizadeh claims the systems being tested are defensive, not offensive, in nature in an attempt to play down U.S. officials’ allegations. But in the same statement, he warned the U.S. against taking any “hostile action.”
“If the enemy makes a mistake, our roaring missiles will hit their targets,” he said. “Knowing the capabilities of our armed forces, I am to ensure you [sic] that foreign threats cannot do us any harm.”