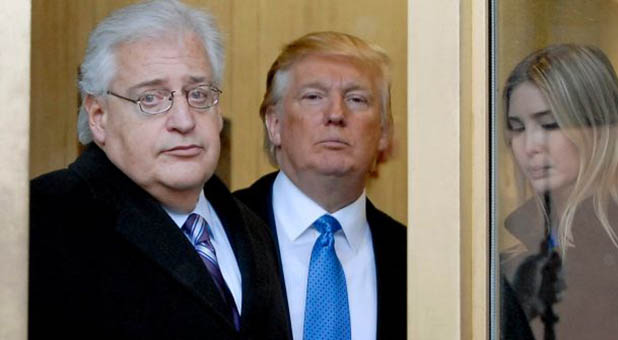 2/2/2017 BOB ESCHLIMAN  CHARISMA NEWS
Earlier this week, a group of more than 70 evangelical leaders met with U.S. Ambassador to Israel-Designate David Friedman in Washington, D.C., for more than an hour to discuss his nomination as well as the Trump administration’s agenda regarding the bilateral relationship with the Jewish state.
The meeting was convened by Joseph Sabag, U.S. National Director for Israel Allies Foundation; Mario Bramnick, President of Hispanic Israel Leadership Coalition and Vice President of the National Hispanic Christian Leadership Coalition; Bill Dallas, CEO of United in Purpose; and Jim Garlow, Senior Pastor of Skyline Wesleyan Church. The combined delegation of faith leaders represented millions of Christians from around the world through major denominations and networks.
Following the meeting, the pastors consolidated their support for Friedman’s nomination and issued a joint letter to President Donald Trump.
“After meeting with Mr. Friedman in person, it is clear to us that he is a man of character, principle and faith,” Bramnick said. “We believe he will apply his formidable expertise and will faithfully champion our country’s interests.
“Now more than perhaps at any other time in modern history, it is vitally important, to both Christians and to our nation as a whole, that America stand firmly behind Israel, the only pluralistic and democratic nation in the region—a nation that shares our values. We are grateful to Mr. Friedman for graciously spending his time meeting with our coalition, and we are pleased to say that we enthusiastically support his nomination.”
The joint letter expresses the group’s willingness to support moving the U.S. Embassy from Tel Aviv to Jerusalem, should the administration choose to do so.
“While Mr. Friedman is someone we have known and trusted, our meeting today only strengthened our support,” Sabag said. “What we can say definitively is Mr. Friedman and President Trump represent a vast upgrade in our nation’s support for Israel, and that’s something all Americans should applaud and especially evangelical Christians.”
The following is the letter sent to the president, applauding Friedman’s nomination an offering support for moving the U.S. Embassy in Israel:
Dear President Trump:
We write today as evangelical leaders and lovers of Israel, offering the blessings and support of the many millions of Americans whom we collectively represent. We wish to applaud your nomination of David Friedman to be the United States ambassador to the state of Israel and call upon all members of the United States Senate to vote in favor of his confirmation. Furthermore, we wish to express our support should your administration decide to move our U.S. Embassy to the eternal and indivisible capital of the Jewish nation, the holy city of Jerusalem.
Our support for Israel is first and foremost rooted in the Bible, in which it is clearly established that God gave the land of Israel, with Jerusalem as its capital, to the Jewish people as an eternal covenant. Indeed, the claim and presence of Jewish people in Israel and Jerusalem has remained constant for more than 3000 years.
Additionally, it is in America’s best interest to have a democratic and pluralistic ally like Israel in the Middle East, a nation that shares our values.
Of concern to Christians in particular, Israel is the only country in the Middle East where the freedom of religion is assured and protected. Given the attempted genocide of Christians and the escalating persecution of the church taking place throughout the surrounding region, our community has never seen a more critical time for standing in unwavering support of Israel. Additionally, the abundance of Christian heritage sites in Israel and its territories makes it an especially sacred place for our community, where the freedom of access and free exercise of our religion can only be guaranteed under Israeli sovereignty.
Our meeting with Mr. Friedman has made it clear that you have wisely selected a fellow man of faith, character and principle to represent our country’s interests in Israel. We are certain that in his position he will act effectively to champion the vital concerns and hopes of the Christian community. More broadly, we are confident that Mr. Friedman’s great talents and expertise will play a key part in carrying out the vast upgrade in support for Israel that your administration has committed to.
Despite the challenges and obstacles that may confront our support for Israel, we know that America remains blessed as “the land of the free and the home of the brave” in large part due to this support. Therefore, at this important time, we wish to affirm our community’s commitment to stand with our elected government, Ambassador Friedman, and you, our new president, as you lead our own great nation in pursuit of the many blessings to be drawn from our stance with Israel, the light unto the nations.