Play Video1:57
As part of the ‘March for Life,’ thousands of abortion opponents from across the country gathered in D.C. and marched from the Washington Monument to the U.S. Supreme Court with renewed optimism from an administration expected to move forward with antiabortion policies. (Video: McKenna Ewen/Photo: Getty Images/The Washington Post) 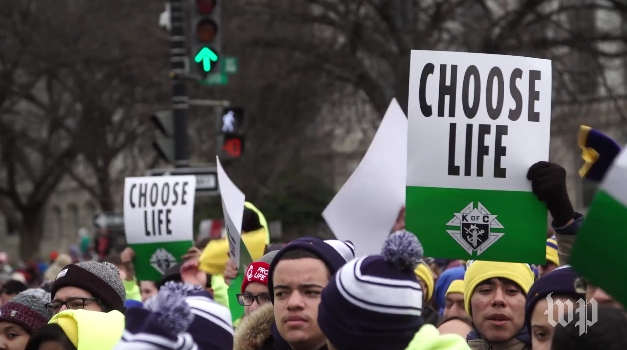 March for Life: Pence speaks as thousands assemble at Washington Monument
Washington Post By Julie Zauzmer and Sarah Pulliam Bailey January 27
Thousands of abortion opponents gathered in cold, blustery weather near the Washington Monument Friday and heard Vice President Mike Pence tell the annual March for Life that the Trump administration is determined to advance the fight against abortion.
The massive crowd, bearing flags, banners and placards, then flowed down Constitution Avenue, filling the street, and rallied at the Supreme Court building across from the Capitol.
“We will not grow weary,” Pence said in a ten-minute addresss to the throng at the monument. “We will not rest, until we restore a culture of life in America for ourselves and our posterity,” He said the administration is bent on ending tax-payer funding of abortion and abortion providers. And he said that “next week President Donald Trump will announce a Supreme Court nominee who will uphold the God-given liberty enshrined in our Constitution in the tradition of the late and great Justice Antonin Scalia.”
Scalia, a conservative associate justice of the Supreme Court, died last year.
“Life is winning again in America,” said Pence, who added that Trump asked him to speak at the rally. “That is evident in…the historic election of a president…who I proudly say stands for the right to life.”
Pence was the first U.S. vice president to address the march in its history.
Bundled against a stiff wind, marchers from around the country first descended on the northeast grounds of the monument.
Pence, who has called himself an “evangelical Catholic,” has long been a hero among antiabortion activists and as governor of Indiana signed what was considered some of the strictest laws on abortion.
Also addressing the crowd was key Trump advisor Kellyanne Conway.
“I am a wife, a mother, a Catholic, counselor to the president of the United States of America and, yes, I am pro-life,” she said.

‘Life is winning in America’: Pence speaks at March for Life