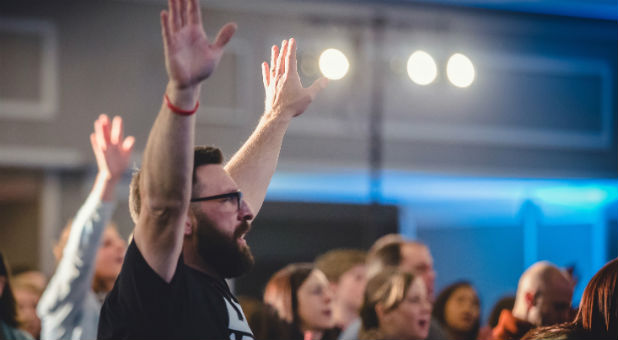 With Synergy of Mercy and Truth, OneVoiceDC Prayer Gathering Raises a Song for Life
JOSH M. SHEPHERD/BOUND4LIFE  Jan. 26, 2017
On Monday, President Donald Trump signed the Mexico City Policy as one of his first acts on his first Monday in office—banning any U.S. funding of overseas groups that provide or promote abortion. Many praised the executive order as a “great start.”
Pro-life leaders see years of policy battles and work ahead to protect women and lives in the womb. “In this lifelong endeavor of upholding the value of every life, it is easy to grow weary,” notes Bound4LIFE executive director Matt Lockett. “The only thing that can sustain our stand is making the space and taking the time to hear from God Himself,” says Lockett, who has led a group standing in prayer outside the U.S. Supreme Court since 2004. “That’s why, when Ryan and Bethany Bomberger floated the idea of a prayer gathering linked to the March for Life, we jumped at the chance to partner with them.”
OneVoiceDC is an annual prayer and worship gathering to “speak life and biblical truth into the greatest human rights injustice of our day, which is abortion,” according to event co-founder Bethany Bomberger. DC-area churches and pro-life ministries nationwide are represented with a diversity of ethnicities, denominations and worship styles.
For three years, she and her husband Ryan have brought together leading pro-life voices in a different format than one normally encounters in Washington. Rather than presenting formal speeches, leaders like Alveda King, Tony Perkins, Star Parker, Charmaine Yoest and Bishop Harry Jackson have shared their hearts in prayers to God.
Two leaders, both returning to the event this Thursday night, illustrate how mercy and truth infuse this non-denominational prayer gathering.“We come to You tonight praising You for forgiveness,” prayed Abby Johnson at OneVoiceDC. “We know that none of us is worthy of redemption, but because of Your precious blood—because of Your scandalous mercy—we are forgiven. You love us so much. Because You call us Your children, we are able to receive Your love.”
Johnson, a former Planned Parenthood director, now runs a ministry to help abortion workers leave the industry. “I pray for those who are still trapped inside the abortion industry—that they find Your grace and run into Your arms, like a child runs to her father! I ask that there would be an exodus from the abortion industry.”
“God, touch their hearts as only You can do. I ask that You would replace the fear in their hearts with overwhelming joy,” Johnson continued.
“Lord, would you give us Your compassion for these workers?” she asked, challenging those assembled to cast off attitudes of anger and offense. “No one is beyond conversion because no one is beyond Your power. I pray that the doors of these abortion facilities would be shut.”
Right after Johnson, Catherine Davis came at the issue of abortion from a different perspective. Nearly two years ago, Davis led a prayer march in Selma, Alabama to close an illegal abortion center. Only months later, the abortionist closed up shop. The story is told in a new documentary, Hear from Heaven, premiering on the evening of March for Life 2017.
“Father God, we come before Your throne tonight with Thanksgiving. You do miracles in the earth today,” Davis began.
“You showed us that with the Center for Medical Progress videos that revealed the truth about abortion in America. You showed us that in Selma, Alabama when You shut down that illegal abortionist—no one can take credit for that but You, Lord!”
She continued: “Father, we come today asking for another miracle: that You would raise up Your army to end the scourge of abortion in this nation. Awaken the black community who have been blinded to this scourge for so long. God, expose the truth that abortion has been about population control from its beginning.
“We pray You will go from heart to heart and raise them up to join this fight for life—just like You did in Selma, where black, white, Hispanic, Native American and everybody came together as one. Together, our unity broke the influence of that illegal abortionist,” she recounted.
Davis prayed with fiery passion: “We pray tonight for an unleashing, beginning here in Washington, D.C., and growing to an avalanche that will break the influence of abortion over this nation once and for all.”
This Thursday evening, Davis and Johnson are slated to join other leaders such as Eric Metaxas, Terri LaShae, the Transform DJs (Jonathan and Angela Burgess), Bishop Vincent Matthews, Reverend Dean Nelson, Pastor Kate Costa, Father Terry Gensemer, Charismatic Episcopal Church youth, Pastor Bill Shuler and others at OneVoiceDC.
The prayer and worship gathering will begin at 7 p.m. at Renaissance Downtown DC Hotel. No registration is required and full event details are available online. As Davis concluded in her prayer: “Raise us up from OneVoiceDC to One Voice USA. We won’t run from the fight, we’ll run to the fight!”

Josh M. Shepherd serves as communications manager at Bound4LIFE International, a faith-based pro-life group. He previously worked on staff at The Heritage Foundation and Focus on the Family. Josh and his wife Terri live in the Washington, D.C. area.
Reprinted with permission from Bound4LIFE.
Leaders are readers! Subscribe now and get 3 magazines for the price of 1. Get Ministry Today, Charisma and SpiritLed Woman all for $24. YES – Sign me up!
3 Reasons Why you should read Life in the Spirit. 1) Get to know the Holy Spirit. 2) Learn to enter God’s presence 3) Hear God’s voice clearly! Click Here to draw closer to God!
Love For His People, Inc. founded in 2010 by Steve & Laurie Martin. Charlotte, NC USA