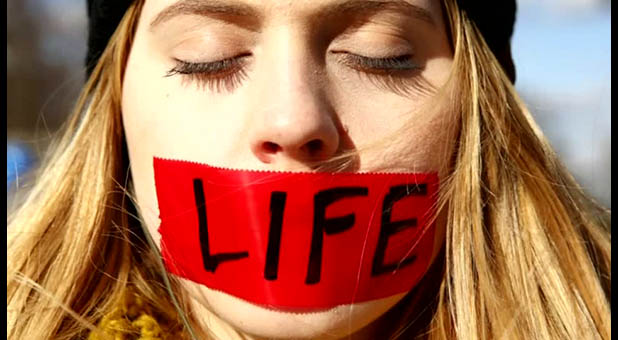 Once Again, Pro-Life Women Have Been Silenced

1/20/2017 KATRINA TRINKO/DAILY SIGNAL  CHARISMA NEWS
It’s 2017, and women are still being silenced.
The twist is that it’s now by other women.
The Women’s March on Washington, scheduled to occur the day after President-elect Donald Trump’s inauguration, had listed a pro-life group, New Wave Feminists, as a partner organization. After The Atlantic highlighted the group’s participation as a partner in the march, the Women’s March took the group off the list, saying its inclusion had been an “error.”
“The protest is pro-choice, and that has been our stance from Day One,” the Women’s March said in a statement. “We want to assure all of our partners, as well as our participants, that we are pro-choice as clearly stated in our Unity Principles. We look forward to marching on behalf of individuals who share the view that women deserve the right to make their own reproductive choices.”
Never mind that the event’s organizers had told The Daily Signal’s Kelsey Harkness in December that pro-lifers were welcome to participate in the Women’s March. “The message is not whether a person is pro-life or pro-choice,” said march organizer Tamika Mallory at the time.
It wasn’t entirely surprising they caved. Since Mallory spoke to The Daily Signal, Planned Parenthood has become a partner. And after The Atlantic published its article about the New Wave Feminists’ inclusion, liberal feminists tweeted their dismay.
The exact mission of the Women’s March, which started with Hawaii grandmother Teresa Shook’s Facebook comment on election night that “I think we should march,” has been somewhat nebulous from its inception.
“What sparked the need for this movement was the rhetoric of the campaign was so demeaning to women,” Shook told ABC’s Good Morning America in an interview. “I just felt women needed to stand up and say, ‘Here we are, hear our voice, we’re strong, we’re empowered, and we’re not going away.'”
But regardless of the mission the event organizers finally settled upon (assuming they did settle on one—the Women’s March is now in trouble with liberal feminists for removing a statement on rights for sex workers), it shouldn’t be called the Women’s March if it isn’t meant to be inclusive for all women.
As much as the left (and some of its cheerleaders in the media) loves to portray women as a unified bloc of pink-wearing Planned Parenthood cheerleaders who cherish no political right as much as they do the right to abortion, the political reality is far more complicated.
Four out of 10 women in America think abortion should be “illegal in all/most cases,” according to a poll released last year by the Pew Research Center. And two-thirds of women voters support legislation that would ban abortions after 20 weeks except if the mother’s life is in danger or in cases of rape and incest, according to a November poll commissioned by the Susan B. Anthony List, a pro-life organization.
In other words, the pro-choice position of the “Women’s March” is excluding a lot of American women.
And unfortunately, that’s all too common. In our political discourse, it’s regularly assumed that all women agree with the Lena Dunhams of the world.
It doesn’t matter how many women passionately believe both female and male unborn children deserve the right to life, despite being small and dependent. It doesn’t matter how many women think all women deserve something better than the kind of treatment delivered by Dr. Kermit Gosnell, under whose care a woman undergoing a second-trimester abortion died.
It doesn’t matter how many women think what can best help a woman facing an unexpected pregnancy is financial support and personal care, the kind delivered by pregnancy centers across the country—not a push that she end the life of her child.
Or at least that doesn’t matter to the liberal feminists who constantly demand pro-life women be excluded.
It’s time the left accept that women have a diversity of views on many issues, including abortion.
And if liberal feminists are sincere about women’s rights, they’ll realize that means all women, not just those they agree with, deserve a seat at the table (or a place in the march) to represent their views.

Katrina Trinko is managing editor of The Daily Signal and a member of USA Today‘s Board of Contributors.
This article was originally published at DailySignal.com. Used with permission.
Leaders are readers! Subscribe now and get 3 magazines for the price of 1. Get Ministry Today, Charisma and SpiritLed Woman all for $24. YES – Sign me up!
3 Reasons Why you should read Life in the Spirit. 1) Get to know the Holy Spirit. 2) Learn to enter God’s presence 3) Hear God’s voice clearly! Click Here to draw closer to God!
Love For His People, Inc. founded in 2010 by Steve & Laurie Martin. Charlotte, NC USA