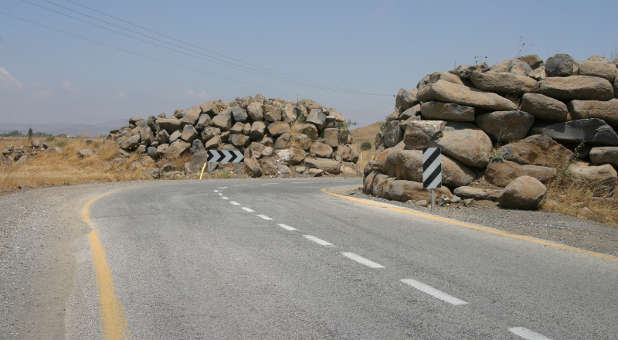 Why We Need Another Damascus Road Revelation

A popular mountain peak frequented by tourists in Israel is Mount Bental in the Golan Heights. From the top of this mountain, one can see into Lebanon to the northwest and into Syria to the east, bringing home just how small Israel is and how close are her enemies: Hezbollah in South Lebanon, ISIS and other jihadist groups in Syria, not to mention the Syrian Assad regime.
Looking down into Syria, one can see a modern highway built in the general vicinity of one of the ancient roads leading into Damascus. The conversion of Saul in Acts 9 took place on just such a road, so this is a great place to review that story and act upon its lesson.
Saul was an enemy of the believers in Jesus and had the authority of the high priest in Jerusalem to capture and bring them bound to Jerusalem.
The believers in Damascus were terrified and must have prayed much for Saul, because the next part of the story is nothing short of a miracle. Jesus appears to Saul before he even reaches the city and causes him to lose his sight. Ananias is then told to find Saul, lay hands on him, and pray for him to receive the Holy Spirit. Saul spends the rest of his life as: “Paul, a servant of Jesus Christ, called to be an apostle and set apart for the gospel of God” (Rom. 1:1).
Praying for Our Enemy
The lesson from this story is to pray for everyone—even one’s enemies, who are bent on doing harm. Today, there is a great spiritual battle brewing over the region, and the same forces that want to destroy Israel and Christian communities are killing each other in the quest for control. Mount Bental is the perfect place from which to intercede for all the people caught up in this turmoil.
The Middle East, the birthplace of Christianity, was predominantly Christian before the Islamic forces invaded in the seventh century. A thousand years ago, there were more Christians in the Middle East than in Europe. Even a century ago, more than 20 percent of the region’s population was Christian.
Today, estimates put the Christian population in the region at less than 5 percent and likely to become extinct. The second-largest Christian community in the Middle East, after the Copts of Egypt, is the Syriac/Assyrian Christians from Iraq, Syria and surrounding areas. They are now displaced; many are refugees and will never regain their community’s size and strength.
Hearts should break over the human toll and suffering this conflict has and could still potentially cause. All the peoples of the Middle East—Jew, Christian and Muslim—are, in one way or another, victims of the spiritual stronghold over the region that causes hatred, violence and death.
There needs to be much prayer for the protection of Israel and the Christians, but also for the gospel to go forth throughout the region in even greater ways than it already is. Indications are that the region is more open to the gospel than ever before. Throughout the Muslim world, Jesus is appearing to people in dreams and visions, and they are turning to Him. What began as a small trickle in the early 1980s has mushroomed to now millions of Muslims who have turned to Christ.
God Chose Israel for Blessing
God loves all the peoples of the Middle East, as they are part of the world He loved and sent His Son to die for (John 3:16). This is just as true for the Arabs or Muslims, as it is for anyone else. God’s choice of Israel was not to bless the Jewish people to the exclusion of others, but that through them He would bless all the families of the earth (see Gen. 12:3). In fact, it is because of God’s love for the world that He brought into existence the nation of Israel through whom He would bring about His redemptive plan.
Millions of people are caught in the crossfire of the forces of evil that hate God, His plan and His people. Let’s pray for them. A Damascus Road revelation of the Prince of Peace is their only hope.

Susan M. Michael is US Director of the International Christian Embassy Jerusalem www.icejusa.org and her articles can be found at icejusa.org/susans-blog
For information on the ICEJ’s tours to Israel go to www.icejusa.org/tours
Leaders are readers! Subscribe now and get 3 magazines for the price of 1. Get Ministry Today, Charisma and SpiritLed Woman all for $24. YES – Sign me up!
3 Reasons Why you should read Life in the Spirit. 1) Get to know the Holy Spirit. 2) Learn to enter God’s presence 3) Hear God’s voice clearly! Click Here to draw closer to God!
Did you enjoy this blog? Click here to receive it by email.
Love For His People, Inc. founded in 2010 by Steve & Laurie Martin. Charlotte, NC USA