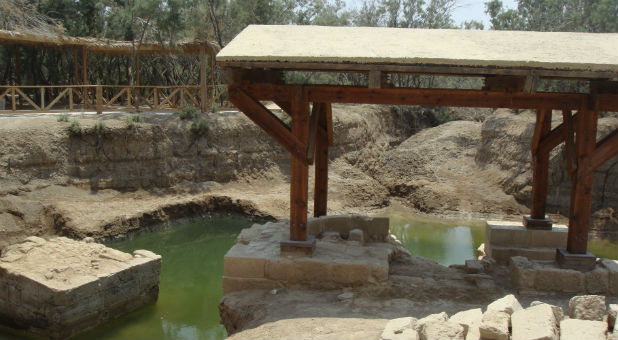 ‘Ghost Churches’ on Jordan River May Finally Be Reopened, But With an Explosive Caveat

1/18/2017 ORI LEWIS/REUTERS  CHARIMSA NEWS
Join us on our podcast each weekday for an interesting story, well told, from Charisma News. Listen at charismapodcastnetwork.com.
Ghost churches on the western bank of the Jordan River, near where Jesus is believed to have been baptized, could be reopened to pilgrims as part of a project to remove booby traps and land mines.
The river banks were once a war zone between Israel and Jordan and were littered with thousands of mines and unexploded ordnance. The two neighbors made peace in 1994, but it took many years before some mine-clearing began.
Both claim that the site where John the Baptist and Jesus met is on their side of the river. The Gospel of John refers to “Bethany beyond the Jordan” without further details.
In 2002, Jordan opened its site, showing remains of ancient churches and writings of pilgrims down the centuries to bolster its claim. UNESCO declared it a World Heritage Site in 2015.
The site in the Israeli-occupied West Bank opened in 2011 and has stairs for pilgrims to descend into the muddy river. It has more visitors than the Jordanian site but its churches, mostly built in the 1930s, has remained strictly off-limits.
The Halo Trust, a Scottish-based charity that has cleared minefields worldwide and was once sponsored by the late Princess Diana, is looking to raise $4 million to make western site safe.
It says it will need two years to clear the small churches along 100 hectares (247 acres) of land that belongs to the Roman Catholic and Eastern Orthodox churches, and that Israeli, Jordanian and Palestinian authorities support the endeavor.
The mined area is about a kilometer (half-mile) from the cleared area at Qasr al-Yahud where Christian pilgrims already flock to be baptized.
“Over 450,000 tourists from all over the world come to visit this site every year and Halo believes that after (the church area) is cleared and rebuilt, the local economy will benefit,” Halo’s West Bank project manager Ronen Shimoni told Reuters.
Christians are also baptized on the Jordanian side, where several churches from different denominations have been built in recent years to welcome pilgrims.
Qasr al-Yahud is near the Palestinian town of Jericho and about a 30-minute drive from Jerusalem.
Halo says some of the seven abandoned church buildings were boobytrapped by Israel after it captured the West Bank in a 1967 war, making the work for the group’s team of 35 to 40 sappers, mainly from Georgia, more complex.
At the time, Israel planted the explosives to help secure its frontier against infiltration from Jordan.
“We are expecting to find around 4,500 targets. Most are anti-tank mines, but there are also anti-personnel mines and a few hundred unexploded ordnances, abandoned explosives, and improvised devices inside the churches,” said Michael Heiman of Israel’s Defense Ministry.