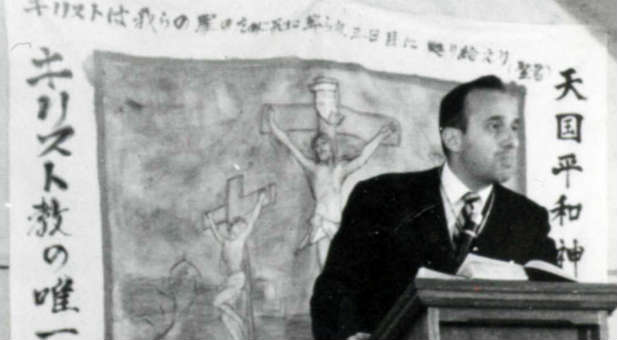 Longtime Missionary to Japan Dies at 88

1/14/2017 DAN WOODING/ASSIST NEWS SERVICE
Join us on our podcast each weekday for an interesting story, well told, from Charisma News. Listen at charismapodcastnetwork.com.
Kenny Joseph, longtime missionary to Japan, passed away Thursday, Jan. 12, 2017, in Fullerton, California, at the age of 88.
Kenny and his wife, Lila, who met in Japan, were two people who answered General Douglas MacArthur’s request for 10,000 missionaries to go to Japan at the end of World War II to help spiritually rebuild the devastated country after the firebombing of Tokyo and the two nuclear bombings that put an end to the war with Japan.
Kenny Joseph was born in Chicago, Illinois, on Oct. 30, 1928, to Assyrian-American immigrant parents Sam and Martha Joseph. Raised in the Presbyterian church, he accepted Christ at a Charles E. Fuller rally held at Soldier Field when he was 17 years old.
After attending Moody Bible Institute and Bob Jones University, Joseph traveled to Japan in 1951 at the age of 23 to begin serving as a missionary with TEAM. In 1954, he met fellow missionary Lila Finsaas, the two were married in 1955, and they served together in Japan before relocating their ministry to the U.S. in 2012.
Joseph served in numerous capacities in Japan, editing publications that served the missionary community, including Japan Harvest and The Japan Journal, and he later founded and published REAP Magazine, which he published and edited for a decade. He also authored the Japan Missionary Language Handbook first released in 1955 and re-released in 1982 as Combined Japan Missionary Language Handbook.
He was a tireless advocate of the theory that Christianity arrived in Japan far earlier than commonly understood. He wrote extensively that the Christian faith first appeared in Japan in the second century, not in 1549, when most scholars believe Francis Xavier first brought the gospel to Japan. He had recently completed his final book, Japan’s Christian Roots, at the time of his passing.
A pioneering missionary who used innovative techniques to spread the gospel in Asia, Joseph taught at Japan Christian College and later coined the term “ad-vangelism”: buying advertising in secular publications for Christian-themed messages. He later championed the cause of using Christian weddings to promulgate Christianity in Japan, performing them himself and facilitating opportunities for other missionaries to perform them as well.
He was also involved in Bible-smuggling efforts throughout Asia and traveled beyond Japan to other Asian nations, including Korea, India, Bangladesh, the Philippines, Thailand and others. He performed the final evangelistic crusades in Vietnam before the fall of Saigon. In the 1970s, he was involved with anti-Communist organizations in Asia. Since 1976, he pastored Grace Church in Tokyo and founded REAP Mission (Reinforcing Evangelists and Aiding Pastors) in 1967.
“Kenny Joseph expressed his love for the Lord by obeying the command to feed His sheep,” noted REAP Mission Chairman William F. Turner, who supervised Joseph’s missionary work since 1978. “He ran the race, he kept the faith and completed his remarkable journey on this earth.”
I had the rare privilege of writing up the amazing story of Kenny and Lila Joseph in a book called God’s Ambassadors in Japan, and flew to Tokyo to help launch it and meet with his many friends there. I have written many biographies, but this one was special because Kenny and Lila were such dedicated and fascinating people to be with.
Joseph returned to the U.S. in 2012 and continued a busy schedule until the end, working on his forthcoming book and conducting speaking engagements. A lifelong Cubs fan who once tried out for the team in high school, he lived to see his beloved team win the World Series. He is survived by his wife, Lila, sister Barbara, and four sons—Robert, Mark, Ken and Jim—as well as 15 grandchildren. A celebration of life service will be held in Southern California on Jan. 21. Details will be posted at kennyjoseph.com, where you can order a copy of his book, and see more photos of his life and ministry.

Dan Wooding is an award-winning winning author, broadcaster and journalist who was born in Nigeria, West Africa, of British missionary parents, Alfred and Anne Wooding, who then worked with the Sudan Interior Mission, now known as SIM. He now lives in Southern California with his wife, Norma, to whom he has been married for more than 53 years. They have two sons, Andrew and Peter, and six grandchildren who all live in the U.K. Dan is the founder/president of the ASSIST News Service (ANS), and is also the author or co-author of some 45 books, including God’s Ambassadors in Japan. He has a weekly radio show and two TV programs all based in Southern California.
This article originally appeared on Assist News Service.
Leaders are readers! Subscribe now and get 3 magazines for the price of 1. Get Ministry Today, Charisma and SpiritLed Woman all for $24. YES – Sign me up!
3 Reasons Why you should read Life in the Spirit. 1) Get to know the Holy Spirit. 2) Learn to enter God’s presence 3) Hear God’s voice clearly! Click Here to draw closer to God!
Love For His People, Inc. founded in 2010 by Steve & Laurie Martin. Charlotte, NC USA