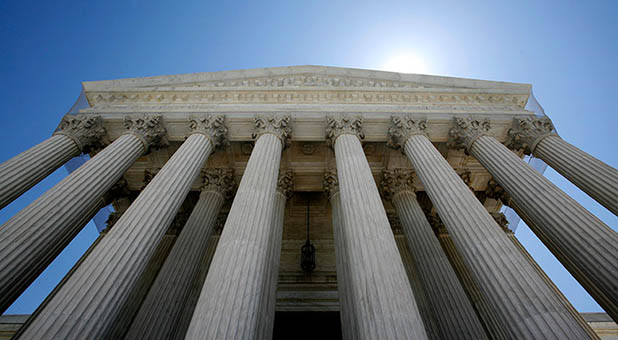 1/12/2017 BOB ESCHLIMAN  CHARISMA NEWS
With the U.S. Supreme Court about to consider the Obama administration’s “interpretation” that the Title IX sexual discrimination laws related to education also include protections for “gender identity,” the legal opinions are piling up on both sides of the issue.
On behalf of the appellant in the case, the Gloucester County (Va.) School Board, Liberty Counsel filed an amicus brief Wednesday with the high court. In part, the brief states:
Advancements in biotechnology have demonstrated what society has intuitively understood for millennia, i.e., that human beings are conceived as either male or female and there is no scientific basis for a claim that individuals have a separate “gender identity” that can differ from their biological sex. The Department of Justice Civil Rights Division and the Department of Education Office of Civil Rights ignored this inconvenient truth when they announced that the term “sex” in Title IX now includes “gender identity” so that sex-separate private facilities must be turned into unisex social laboratories. This Court should reject the Department’s attempt to infuse Title IX with a sociopolitical agenda wholly lacking in evidentiary foundation.
As has been previously reported, the student who brought the original lawsuit against the school district, alleging that her civil rights were violated for not being allowed to use opposite-sex facilities is 17-year-old “Gavin” Grimm. The high school senior is a girl who suffers from gender dysphoria, which makes her believe she is a boy; she has not had gender reassignment surgery.
When Grimm requested to use the boys’ restroom, some parents complained, prompting the school board to adopt a policy that she must use girls’ restrooms and locker facilities or a single-stall restroom in the nurse’s office. A Virginia federal court ruled in the district’s favor, but that decision was overturned by the 4th Circuit Court of Appeals.
When it agreed to take up the case, the Supreme Court placed a stay on the 4th Circuit decision until it could render a superseding decision. Liberty Counsel is arguing the lower court lacks the legal authority to render a decision, particularly one that goes against the clear meaning of the word “sex” used in the decades-old law.
“Liberty Counsel stands with the Gloucester School Board, as its responsibility is to protect the safety of students from harmful situations,” Liberty Counsel Founder and Chairman Mat Staver said. “It is absurd that the Supreme Court has to address whether a girl with gender dysphoria should be treated as a boy. The federal law does not allow persons to subjectively think, and therefore be treated, as the opposite of their biological sex. It is very obvious how the Supreme Court should rule in this case.”
First Liberty Institute has also weighed in on the case, filing its own amicus brief on behalf of 22 religious educational institutions and educators. Among those represented by First Liberty is the Association of Christian Schools International, the largest Protestant educational organization in the world.
“The public has paid a lot of attention to how this case affects public schools, but one very important category of educational institutions has been overlooked—private, religious schools,” First Liberty CEO and President Kelly Shackelford said. “Do we really want to legalize a policy that could cause faith-based schools to be stripped of their Title IX federal funding, without giving them any voice in the matter?”
In its brief, First Liberty argues that the First Amendment requires faith-based schools and educators to be able to voice their concerns about policies before the government enacts them. That process was not followed with the Obama Administration’s transgender mandate, which has prompted the Christian schools to ask the high court to reverse the lower court’s opinion.
“There is one important question the Supreme Court must answer—will they protect the rights of religious schools and colleges to have a voice in a critical rulemaking process that will affect their ability to operate according to the teachings of their faith?” Shackelford concluded. “Their answer to this question will determine the future of religious freedom for faith-based schools and colleges nationwide.”