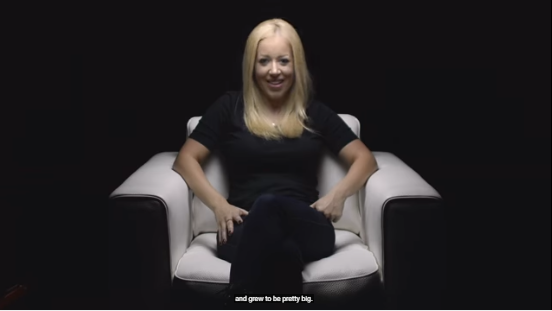 Lynsi Snyder
Join us on the new C-Pop podcast where Taylor and Jessilyn discuss, debate and sometimes deride pop culture with a strong sense of humor and a focus on Christ. Listen at charismapodcastnetwork.com.

1/11/2017 KRISTIN COLE/A. LARRY ROSS  CHARISMA NEWS
I Am Second, a storytelling movement meant to inspire others, today released a short film on IAmSecond.com featuring Lynsi Snyder, president of In-N-Out Burger. The film, which is part of I Am Second’s White Chair Film Series, provides a rare look into the past struggles and present success of the very private owner of the 318-store burger chain.
In the film, Snyder discusses her late father and his profound influence on her life, and how his early and tragic death impacted her own relationships.
“My dad was really funny. He was a little bit eccentric. Loved to make people laugh; loved to laugh at himself,” Snyder said. “He spoke to me like I was an adult when I was four years old. Somehow he had wisdom and discernment that I was going to be exposed to so many different things in life, and I was going to need that straightforwardness and honesty.”
But Snyder’s memories of her father also include the sorrow of visiting him in rehab and the pain of her parents’ divorce.
“It was really hard for me to see him fail … I knew how badly he wanted to be a good husband and a good father,” she said.
After his death, Snyder could not bear to be alone. She married at 18, and when that marriage failed, she briefly turned to pot and alcohol to mask the pain of the lost time and love she had had with her father. She searched for love and respect but instead found herself in relationships with men who mistreated and cheated on her. Feeling more isolated and less worthy than ever, she responded to the pain and neglect with adultery of her own, behavior that only deepened her despair.
Grateful now for the lessons offered by those dark times, in the I Am Second film Snyder describes how it was only when she found her true identity and strength in Christ that she was led to her loving, God-fearing husband and to her commitment to live with purpose, sharing knowledge of His love with others to help them transform their lives as she was transforming hers.
In keeping with her belief that media and public attention should be focused on her company rather than on herself, Snyder’s interviews are usually centered on her business or her non-profit foundations. This is one of the few times she has discussed the very personal aspects of her life and spiritual growth.
“I wanted to share hope with others, the knowledge that God can turn anything—broken lives, heartbreak, anything—to good,” Snyder said. “I felt this was the time and place to be transparent and to tell the truth. Sharing my story might help others; I know it has helped me.”
To see where Snyder’s journey has led her today and to view her full I Am Second film, visit http://www.iamsecond.com.