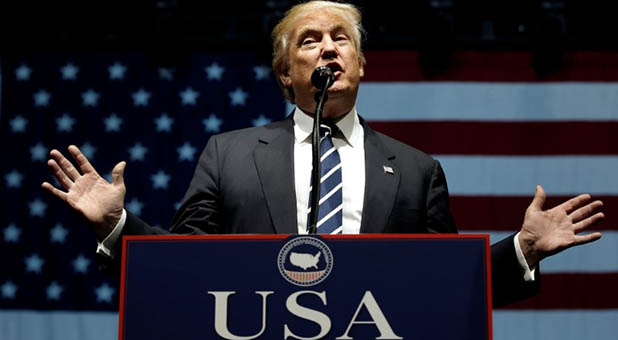 Johnny Enlow: Trump’s Honor and Care for Israel Will Distance America From Many National Catastrophes
Jan. 9, 2017  BOB ESCHLIMAN  CHARISMA NEWS
Social reformer, international speaker and author Johnny Enlow has shared a lengthy word from the Lord with readers of The Elijah List in which he prophesies about the new year ahead.
In the article in which he shares what has been shown to him, he wrote:
Every year at about this time, I am moved to a place of great hope as God shows me some of the things He will do in the coming year. This year, the hope and the joy is almost uncontainable. 2016 was a year of the convergence of the ages with the Azusa Revival’s 110th anniversary and our national presidential election being the highlights. I have written much about both of them, and it is important to note that one year builds on a previous year, and important events and celebrations release greater events and celebrations.
Rosh Hashanah 2015 to Rosh Hashanah 2016 brought us the 70th year of Jubilee, and this unprecedented year of Jubilee brought us God’s choice of Donald Trump as president of the United States and leader of the free world. Trump at age 70 became elected president of this nation during the Hebraic year 5777. On inauguration day, he will be 70 years, 7 months and 7 days old. Because the Electoral College changed some votes, it allowed Trump to end up with exactly 77 more electoral votes—7 is the prime number of God and is why there are seven spirits of God.
Only if you are still out of tune spiritually (or motivated by an unnecessary fear) should this presidency still be a struggle for any of you. Outgoing president Barack Obama’s legacy-tainting final acts against Israel are an immediate, major proof that the insertion of Trump as president was an urgent need for us and our nation. We will avoid many national catastrophes because of the proper honoring and care of Israel that our new president will see to. Let me talk about that before I get to the Reformation Glory Train.
Enlow shares a number of prophetic messages that pertain to the United States, Canada, Britain, Australia and Israel as well as his home state of California. With regard to the U.S. and the incoming presidency of Donald Trump, he shared the following:
As I have stated before, I believe that Trump will be the most important President since Abraham Lincoln and that our nation will in the future have a “before Trump” and “after Trump” historical perspective. I believe that the United States’ great angel named “Union” has been ordered to step in, as he has not been asked to step in since Lincoln’s day. I also believe a great angel of Reformation that was from that day has also been released at this time, and it is for the 2.0 version of reformation.
Heaven is in a very interventionist mode with America at this time, and it is going to take some getting used to for many who don’t understand America’s assigned role among the nations. The United States was formed and fashioned with a foundation of freedom and liberty as a gift to the nations. The nations of the world were hopelessly stuck in dead-end cycles of tyranny, war and devastation. America was and still is the interruption into those cycles, and the call extends well beyond anything we have so far seen.
God’s commitment to seeing America through has not wavered despite our many weaknesses, and this will become increasingly evident to those who have eyes to see. America is also called to be the protector and guarantor of Israel, and it is a primary calling. Because of that call, military might is a must for America as a deterrent to foolishness among the nations. …
What we will see for the next eight years is reflected in the acronym of our new president’s last name.
As you put all these together, you see that these are the ingredients necessary to “make America great.” When America becomes great, it will also allow the nations of the world to step into their greatness as the keys to greatness will be released. I will release more on these five in a future word. This is not about idolizing a man but about recognizing the hand of God in every detail with him. He chose a man named Trump, and he is using his name, his age and almost every detail about him to broadcast a message to those who have ears to hear.

Click here to read the entire article at The Elijah List.
3 Reasons Why you should read Life in the Spirit. 1) Get to know the Holy Spirit. 2) Learn to enter God’s presence 3) Hear God’s voice clearly! Go deeper!
Has God called you to be a leader? Ministry Today magazine is the source that Christian leaders who want to serve with passion and purpose turn to. Subscribe now and receive a free leadership book.
Love For His People, Inc. founded in 2010 by Steve & Laurie Martin. Charlotte, NC USA