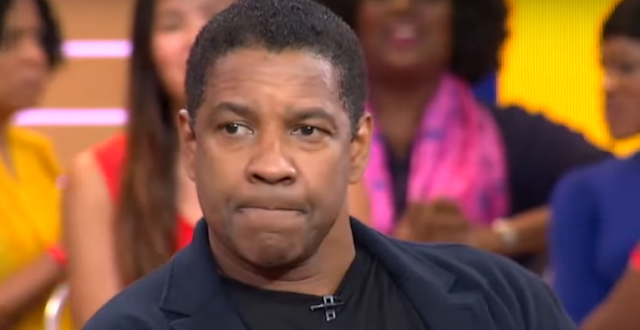 Denzel Washington is one of the most highly regarded actors of the last few decades. Starring in numerous blockbuster movies, he has produced award-winning performances time and time again. What you might not know is that Denzel is a committed Christian and the son of a minister. He recently sat down with pastor T.D. Jakes to his faith and his motivation in life.
Washington cleared up some stuff about the culture of celebrity, saying that fame and fortune were not for him. I “don’t want anything to do with celebrity. I am an actor,” he told Jakes. “I don’t need any watches and all of that. So I’m here to serve God, here to serve my family.”
Denzel also recently spoke of an incredible experience he had whilst filming “Fences” in a Pittsburgh . Washington was amazed when two women offered him solace through prayer.
“A woman on the corner, she was watching me. She made her house a quiet place of prayer for me, and I’d go in there when things were getting overwhelming and just take a breath,” Washington said during a conference call with The Christian Post. “Sometimes I’d just have a prayer with her.”
Washington then shared the story of his encounter with another woman in the same  who said she and her family had been praying for him for more than 30 years.
“There was one woman in particular. Even before we started shooting I met her and I came and said, ‘Oh thank you for coming out.’ She said, ‘We’ve been watching you for a long time.’ I said ‘Well, pray for me.’ [And then] she said, ‘Denzel, I’ve been praying for you for 35 years, my family and I,” he said. “We’ve been watching, we know how hard it is.”
A committed follower of Jesus himself, Denzel has talked at length about his Christian faith. A couple years back, he spoke to GQ magazine about being filled with the Holy Spirit.
“[It] was thirty years ago, at the church I still attend. The minister was preaching: “Just let it go”. I said, “I’m going to go with it.” And I had this tremendous physical and spiritual experience. It did frighten me. I was slobbering, crying, sweating. My cheeks blew up. I was purging. It was too intense. It almost drove me away. I called my mother, and she said I was being filled with the Holy Spirit. I was like, ‘Does that mean I can never have wine again?'”
Denzel has also spoken about the necessity of daily prayer and spending time with God. He shared how he stays devoted to Christ every morning. “Put your slippers way under your bed so when you get up in the morning, you have to get on your knees to find them. And while you’re down there, start your day with prayer. Ask for wisdom. Ask for understanding.”
“Don’t aspire to make a living, aspire to make a difference.”
Love For His People, Inc. founded in 2010 by Steve & Laurie Martin. Charlotte, NC USA
Advertisements