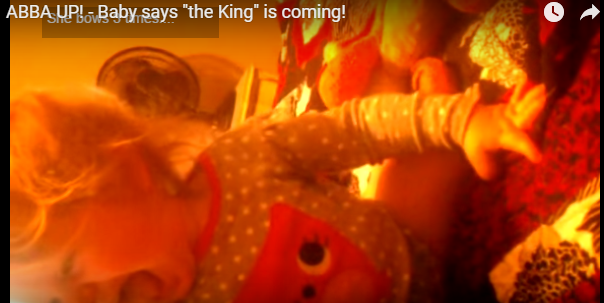 Whether or not you believe in the rapture, the end times, or the final tribulation, a YouTube video is gaining popularity for its recording of a child believed to be prophesying about the Second Coming of Jesus Christ.
Lily Grace was two years old when her mother captured her on video speaking about going up to be with Jesus.
“The King is coming,” she said.
It was January 2015, just around midnight, when her mother, Chelsea Rebecca, said Lily was knocking and talking at her door.
“She was saying, with urgency, ‘Something’s coming! Something’s coming!'”  Rebecca wrote on her YouTube channel. “She elaborated on her dream vision later in the day.”
Chelsea managed to capture that on video and it is going viral.
The child’s words are barely understandable as she says things like “The King,” “Abba up, push you up” and “join Abba up.”
In her YouTube post, Chelsea squelches any criticism of her daughter’s account. She explains that she has not taught her toddler much about the Bible.
“No, I couldn’t teach her this. She JUST turned 2 and is just starting to really come up with diverse words and sentences clearly,” she wrote. “Her best understanding of God prior to this was nightly bedtime prayers, and we had yet to discuss the rapture or His second coming with her (being that she is of course so young).”
The mother said she feels God has confirmed her child’s account.
She references the Bible in Joel 2:28, where the prophet says, “It shall come to pass afterward, that I will pour out my spirit upon all flesh; and your sons and your daughters shall prophesy, your old men shall dream dreams, your young men shall see visions.”
Chelsea said this is not the only time her daughter has had a divine experience.
In a video posted in February 2016, Lily can be seen describing an encounter with Jesus.
“Was He like daddy?” Chelsea is heard asking.
“No!! Not like daddy, like JESUS. He is THE KING! King Abba! He’s like Abba! Jesus King Abba,” Lily said.
Share
Tweet
Email
+5
Love For His People, Inc. founded in 2010 by Steve & Laurie Martin. Charlotte, NC USA