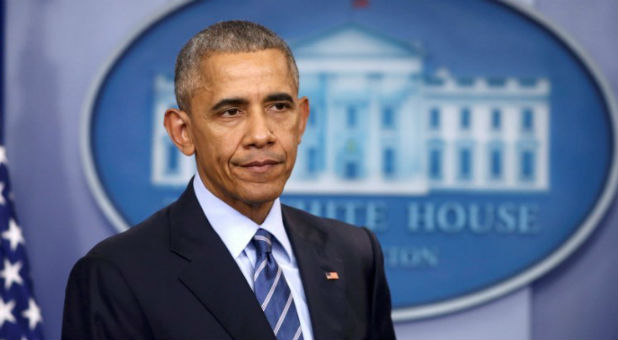 In June 2008, presidential candidate Barack Obama gave a stirring speech to AIPAC, making strong commitments to the Jewish people and Israel. In December, 2016, President Obama’s secretary of state, John Kerry, delivered an important policy speech that directly contradicted some of candidate Obama’s words. The contrast is striking, unnerving and downright hypocritical.
To be fair, there is some consistency between the speeches, as both advocate a two-state solution among other parallels. And on a certain level, President Obama has kept some of the commitments he made to Israel, including massive defense contracts and military aid. And it is true that, until last week, Obama had not allowed the U.N. Security Council to pass any anti-Israel resolutions.
Still, reading Obama’s 2008 speech in light of the last eight years is a real shocker. Consider the following.
In 2008, candidate Obama pledged, “As president, I will work to help Israel achieve the goal of two states, a Jewish state of Israel and a Palestinian state, living side by side in peace and security. And I won’t wait until the waning days of my presidency. I will take an active role and make a personal commitment to do all I can to advance the cause of peace from the start of my administration.”
Ironically, he has done the opposite, not only failing to move the peace process forward but rather, in “the waning days of [his] presidency,” taking aggressive steps to undermine the peace process and to betray Israel. (It’s even possible that before the transfer of power, he will lash out at Israel once more.)
In 2008, Obama declared that, “Jerusalem will remain the capital of Israel, and it must remain undivided.”
This week, John Kerry declared a peace agreement would “provide an agreed resolution for Jerusalem as the internationally recognized capital of the two states, and protect and assure freedom of access to the holy sites consistent with the established status quo.”
He added, “Most acknowledge that Jerusalem should not be divided again like it was in 1967, and we believe that.” But, he continued, “At the same time, there is broad recognition that there will be no peace agreement without reconciling the basic aspirations of both sides to have capitals there.”
Well, here’s a note from Jerusalem to our secretary of state and president: You cannot have it both ways. Either Jerusalem is the undivided capital of Israel, or it is the divided capital of Israel and Palestine. And if Jerusalem is to be the undivided capital of Israel, Mr. Kerry has no reason to protest strongly the relocation of our embassy to Jerusalem, which he did this week as well.
Joel Pollack also points out that “through the Obama administration’s acceptance of U.N. Security Council Resolution 2334 last Friday,” America now “regards the Israel presence in East Jerusalem as ‘settlements’ that are in ‘flagrant violation of international law.'” This means that, “Effectively, the Obama administration has allowed the Palestinians to claim East Jerusalem as their own, with the option of negotiating that claim away. The starting point of negotiations is now a division of Jerusalem ‘like it was in 1967.'”
Getting back to 2008, while pledging to work diplomatically with Iran rather than militarily against Iran, candidate Obama was very clear about the danger Iran presented, stating, “There is no greater threat to Israel—or to the peace and stability of the region—than Iran.”
He continued:

The Iranian regime supports violent extremists and challenges us across the region. It pursues a nuclear capability that could spark a dangerous arms race and raise the prospect of a transfer of nuclear know-how to terrorists. Its president denies the Holocaust and threatens to wipe Israel off the map. The danger from Iran is grave, it is real, and my goal will be to eliminate this threat.

I doubt anyone listening to his speech in 2008 would have imagined he would end up striking such a disastrous deal with Iran, one that not only rewarded the Iranians with billions of dollars, some of which would be used to fund terrorism—Kerry himself admitted to this explicitly—but one which also gave them a clear path to nuclear development in the coming years. Is this not the height of betrayal?
But there’s more. In 2008, then-Senator Obama said:

I have long understood Israel’s quest for peace and need for security. But never more so than during my travels there two years ago. Flying in an [Israeli Defense Forces] helicopter, I saw a narrow and beautiful strip of land nestled against the Mediterranean. On the ground, I met a family who saw their house destroyed by a Katyusha rocket. I spoke to Israeli troops who faced daily threats as they maintained security near the blue line. I talked to people who wanted nothing more simple, or elusive, than a secure future for their children.

Yet in 2011, President Obama briefly suggested Israel return to its totally indefensible pre-1967 borders, which would reduce this “narrow and beautiful strip of land” to as few as nine miles wide, thereby committing national suicide. And in 2015, it was reported that “President Barack Obama is considering agreeing to a United Nations Security Council resolution ’embodying the principles of a two-state solution that would be based on the pre-1967 lines between Israel and the West Bank and Gaza Strip and mutually agreed swaps,’ a senior administration official has told The New York Times.”
Will something like this be the last element in the president’s parting shots against Israel?
Making things even worse is the very strong evidence that the Obama administration worked directly with Palestinian leadership to craft and advance the recent U.N. Security Council resolution, despite the administration’s denials. Evidence includes: 1. Discussion months in advance by political pundits that this was one of the options being discussed by the administration (how did they know this?), 2. Prime Minister Netanyahu stating unequivocally that America was behind the resolution, which he would hardly do without “rather ironclad information” and 3. An Egyptian paper releasing transcripts of a purported meeting between Kerry and Palestinian officials from early December, planning out the strategy.
This is just part of what makes President Obama’s final actions so shameful and why Rabbi Shmuley Boteach was right to say Obama has “demonized Israel little by little.”
So much for the man who said in 2008 that he spoke “as a true friend of Israel,” explaining, “And I know that when I visit with AIPAC, I am among friends. Good friends. Friends who share my strong commitment to make sure that the bond between the United States and Israel is unbreakable today, tomorrow and forever.”
As the old saying goes, with friends like these, who needs enemies?

Dr. Michael Brown (www.askdrbrown.org) is the host of the nationally syndicated Line of Fire radio program. His latest book is Breaking the Stronghold of Food. Connect with him on Facebook or Twitter.
3 Reasons Why you should read Life in the Spirit. 1) Get to know the Holy Spirit. 2) Learn to enter God’s presence 3) Hear God’s voice clearly! Go deeper!
Has God called you to be a leader? Ministry Today magazine is the source that Christian leaders who want to serve with passion and purpose turn to. Subscribe now and receive a free leadership book.
Did you enjoy this blog? Click here to receive it by email.
Love For His People, Inc. founded in 2010 by Steve & Laurie Martin. Charlotte, NC USA