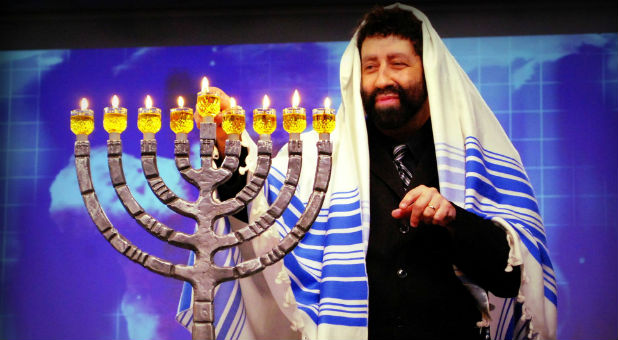 Jonathan Cahn on What It Will Take to See Revival

12/29/2016 CHARLES CHANDLER/BGEA   CHARISMA NEWS
Join us on our podcast each weekday for an interesting story, well told, from Charisma News. Listen at charismapodcastnetwork.com.
All over the country this year at Decision America Tour events, believers said they were crying out to God for revival and a great awakening in America. With the election now past and many unknowns ahead, we need such a move of God to come quickly. Decision recently spoke with Jonathan Cahn, a Messianic Jewish rabbi, about what it will take to spiritually revive the church and the nation. Cahn is a best-selling author and was a featured speaker at the May 5 National Day of Prayer event in Washington, D.C.
Q. It has been suggested that the church is asleep. Do you believe that’s true, and if so, do you see any signs of it beginning to wake up?
A. I believe much of the church is asleep—but not all. There are several things hindering the church from being the true salt it is supposed to be to the world. One is a culture of comfort and prosperity, a me-centered faith. Another is distraction, because we are so plugged into everything else and so overwhelmed by the world and media and entertainment that it doesn’t leave a lot of room for spiritual growth or power. Another is fear, because the church overall is on the defensive now. Some of today’s most famous pastors appear to be afraid to speak on those issues that would have been priorities for the biblical prophets.
We sing “These Are the Days of Elijah,” but the days of Elijah were days of apostasy when the prophets were hunted down. They were days of great power, but it took people who would say “I don’t care what happens to me or my life or my interests. I’m putting God first.” And then God moved powerfully. Those are the Elijahs that God is now calling us to become. So if these are the days of Elijah, we have to be the Elijahs of this day.
Q. What are your hopes right now for revival in this country?
A. Well, that is my hope. I see the only hope as being revival. The question is, will it come? If we just look at the culture, the prospect of turning this around would look very slim. But God is never finished and is always able to do what we consider impossible. Often it looks darkest before God moves, as was the case in other revivals.
My feeling is that it’s going to take a great shaking for a great revival to come to America. There are pockets and movements of revival, but for the massive revival that is needed to turn things around, I believe it’s going to take something dramatic. After 9/11, people flocked to churches for three weeks. You could talk about God with anyone during those three weeks. But there was no repentance. And without repentance, there can’t be revival.
When people ask me whether there will be judgment or revival in America, I answer that sometimes there can be both. Many of us came to the Lord because there was a shaking in some way. I came to Him after my vehicle was hit by a locomotive train. So it’s not necessarily a bad thing to be shaken. Sometimes that’s the only way we come. That’s not only true for people; it’s true for nations.
Q. What else needs to happen?
A. It’s not a new answer, but it’s a true answer: 2 Chronicles 7:14. “If my people who are called by my name …” Humbling ourselves, praying for revival, seeking—truly seeking—His face, turning from our evil ways. That is what God has ordained, so that’s still true. I’ve actually seen it happen in America before in my lifetime, where people took that seriously, and it literally changed the course of American history and world history. I’ve seen God be faithful to that.
Revival could start right now if it starts with us. There is nothing that can stop revival if it starts with us—meaning it’s not merely prayer. That’s not what 2 Chronicles says. It starts with not just talking about revival and praying for revival, but actually living it, walking it, breathing it—making the changes in our lives that we want to see made in America. All of us could still repent. All of us could still turn to God more than we have. All of us could become more on fire for Him. That’s our choice, so revival can begin with us.
Q. Let’s put some specifics to it. What is your definition of revival?
A. Turning back to God. Turning away from idols. Turning away from the world. Turning away from sin. Repentance. Renewing. Reviving. Rededicating. Re-consecrating. Putting Him first. Seeking Him first. Unplugging from all the distractions and getting re-plugged into our first love.
If we look back on our lives, when were we most on fire for God? Well, it shouldn’t be back then. It should be now.
Q. Doesn’t true revival also require a sense of urgency?
A. Yes. Sometimes we disparage the time we have here in view of heaven, but we’ll have forever in heaven, and this life only comes around once. So whatever good we would do, we have to do it now. Whatever soul we want to see saved, we must talk with them now. Whatever act of love, whatever proclaiming of the gospel, we have to do it now, or we never will.
We have to make the most of every moment we have for the Lord—in joy, in love, in confidence, in boldness. We will never walk this way again. These are the most precious of days. These are the days of the harvest.

©2016 BGEA
3 Reasons Why you should read Life in the Spirit. 1) Get to know the Holy Spirit. 2) Learn to enter God’s presence 3) Hear God’s voice clearly! Go deeper!
Has God called you to be a leader? Ministry Today magazine is the source that Christian leaders who want to serve with passion and purpose turn to. Subscribe now and receive a free leadership book.
Love For His People, Inc. founded in 2010 by Steve & Laurie Martin. Charlotte, NC USA