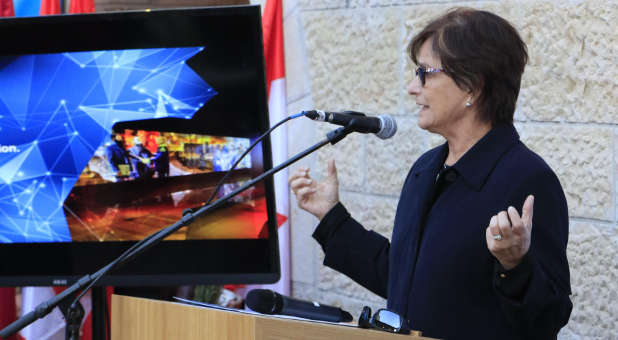 Jerusalem Prayer Team, founded by Dr. Mike Evans, has just exceeded the 14 million membership mark globally. In Israel, Jerusalem Prayer Team is the No. 1 Facebook site nationwide.
Gal Gadot, known for playing the Wonder Woman character in the recent superhero blockbuster movies, has the No. 2 site, and Prime Minister Benjamin Netanyahu’s site is No. 6. In the United States, Joel Osteen’s Facebook page is ranked No. 1 among Christian social media sites with 2.7 million weekly engagements, followed by Jerusalem Prayer Team with 21.1 million weekly and then Joyce Meyer.
“This is a milestone that means so much more than just a figure,” said Dr. Mike Evans. “It represents the greater movement of millions who support the state of Israel, and it tells the world that Jerusalem has many friends in the worldwide Christian community.”
Jerusalem Prayer Team is growing by almost 50,000 members daily. Over 70 percent of the page’s supporters are millennials, and it has millions of members across countries in the world, including over two million in Indonesia, a Muslim country.
As part of a comprehensive, multi-faceted strategy to promote Christian support for Israel, the Jerusalem Prayer Team also operates the Corrie ten Boom House in Haarlem, Holland, as well as the Friends of Zion Heritage Center and the Friends of Zion Museum in Jerusalem (FOZ). During the first year of the FOZ museum operation, over 100,000 individuals toured the facility—50,000 were Israelis.
On Nov. 23, Dr. Evans launched the Ambassador Institute—the newest initiative of Friends of Zion—at a diplomatic conference sponsored by the Jerusalem Post. He spoke at the conference alongside Prime Minister Netanyahu and Defense Minister Avigdor Lieberman. The meeting gathered more than 80 distinguished guests, including ambassadors, ministers, and members of parliament who represented more than 30 countries.
Dr. Evans said in his speech that 21st century wars are primarily religious, economic, media and ideological wars fueled and fed by social media. The FOZ Ambassador Institute is an initiative targeting millennials who have overtaken the baby-boom generation in America. Millennials now total 75.4 million and purchase 54 percent of goods and services via their smartphones. Millennials reject cable news and turn to the social network to be informed. According to Dr. Evans, all these factors make reaching millennials an imperative for the cause of peace in the Middle East.
Dr. Evans’ plan is to educate millennials against replacement theology and the social justice myth with a biblical worldview and to mobilize them to confront anti-Semitism on college campuses and the BDS (Boycott, Divestments and Sanctions) movement targeting Israel. He said the Ambassador Institute will fight this war using the social network Facebook, which began on a college campus.
The Ambassador Institute, through the Friends of Zion Heritage Center, will have a real-time social network communication hub that will be linked to the thousands of Christian TV and radio stations, print media, churches and universities worldwide with content packages and video clips going out weekly. The center will also collaborate with one of the world’s leading research companies to create Israel’s first Christian Zionist think tank.

3 Reasons Why you should read Life in the Spirit. 1) Get to know the Holy Spirit. 2) Learn to enter God’s presence 3) Hear God’s voice clearly! Go deeper!
Has God called you to be a leader? Ministry Today magazine is the source that Christian leaders who want to serve with passion and purpose turn to. Subscribe now and receive a free leadership book.
Did you enjoy this blog? Click here to receive it by email.
Love For His People, Inc. founded in 2010 by Steve & Laurie Martin. Charlotte, NC USA