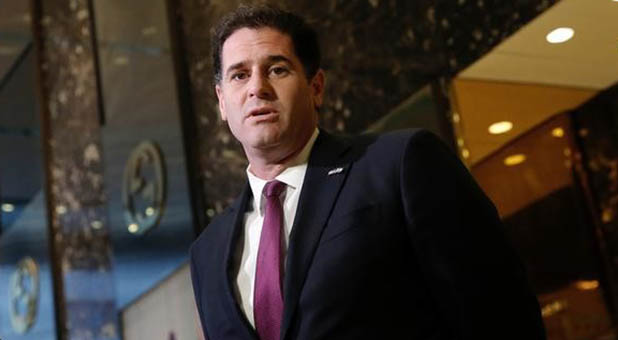 12/23/2016 BOB ESCHLIMAN  CHARISMA NEWS
During the presidential campaign, President-elect Donald Trump befuddled the liberal media and the Washington, D.C., political establishment when he pledged—if elected—to move the U.S. Embassy in Israel from Tel Aviv to Jerusalem.
They claimed it would destabilize the region.
They claimed it would dismantle the ongoing “peace process” between Israel and the Palestinians.
They claimed it would lead to war.
Those, of course, are all the Palestinian talking points, but what they didn’t do was ask those who have the most at stake—the Israelis—what they thought. Had they bothered to do so, it would’ve changed the narrative completely.
This week, during the Israeli Embassy’s annual Hanukkah party, Ambassador to the United States Ron Dermer said he fully endorsed moving the American embassy to Jerusalem. Not only did he think it was a good idea, but he said it would boost the chances of peace in the Middle East.
The reasons for doing so are “pretty clear,” he added.
“The first thing, it would send a strong message against the de-legitimization of Israel and of Jerusalem,” he said. “The second reason why I think the embassy should be moved to our capital is that it would be a great step forward to peace. That’s right. A great step forward to peace.”
Dermer didn’t elaborate on the second point. Palestinian officials, however, have said such a move would effectively end the peace process.
The U.S. maintains a consulate in Jerusalem.