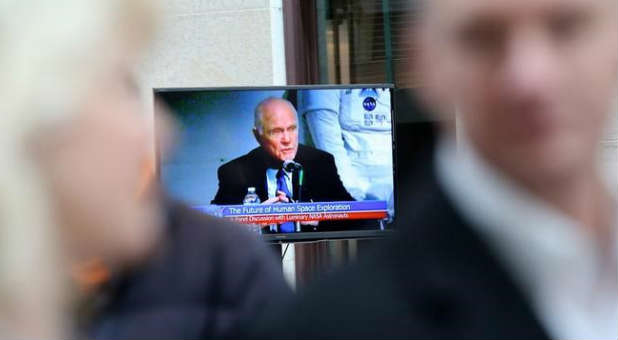 Prophecy: News Anchors Will Be Shaken as They Report Perilous Upcoming World Events

12/22/2016 BILL YOUNT  CHARISMA NEWS
I heard the Father say, “I will begin to shake the news media through the perilous events coming upon the earth.” As news anchors are sent to certain locations where devastation and dangerous conditions emerge, there will be those news stations whose anchors will not be able to withstand the stress and pressure of reporting horrendous news day after day.
The word “anchor” means something that provides stability or security, like an anchor of a ship in the midst of a raging storm. The calmness and stability we have seen, up until now, in our news anchors is about to be highly tested. I sense that what is about to be reported in the near future will make the bad news of yesterday seem as nothing compared to what is about to follow.
“I will begin to promote unknown anchormen and anchorwomen into national media who have an ‘anchor’ that holds and grips the solid rock.”
I saw several known anchormen and anchorwomen shaken to the core of their being as they became weary and unable to cope with the stress of their jobs, day after day. I heard the Spirit say, “Anchors away!” The Lord took me to Acts 27:22-24 and a life-threatening storm where an “anchorman” named Apostle Paul had received a late-breaking news report from the angel of God saying (paraphrased), “Fear not, I have good news in the midst of the bad news. I am with you in the midst of the raging storm. Because of you, I will spare the lives of others on your ship.”
“News-broadcasting stations will give way to news anchors who are being hoisted up from deep waters by the hand of the Lord to be brought on board the battered ships on the sea of life.”
“He shall be the stability of your times, a wealth of salvation, wisdom, and knowledge; the fear of the Lord is His treasure” (Is. 33:6).
These anchormen and anchorwomen will come forth from deep waters of the unknown. They will not only report the perilous news but will have the treasures and the riches of Christ inside of them, so that the power of God will come right through the radio and television screens as people become convicted by their radiant countenance and peace in the midst of chaos. These called-out news anchors will become spectacles to the world as they are given favor to report of the hope within them.
“Some upcoming anointed news anchors will be given words of knowledge on what to do to avoid danger and disease, and they will report the news before it actually takes place.”
The favor of the Lord will increase upon these handpicked vessels, as their accuracy in reporting the news before the news actually spreads throughout broadcasting stations, bringing the fear of the Lord and salvation into many lives. Many will kneel before their televisions, receiving Jesus Christ into their lives with healings and miracles following. Some news anchors will be tagged with Bible names, such as anchorman Daniel or Elijah and anchorwoman Deborah, who speak with such authority that they will predict weather patterns, and at times, change them.
We must pray for those who are now connected in the news media. A great shaking is coming upon them. Let’s pray they will be shaken into the Kingdom through what is happening on the earth. And pray for the promotion of those whom God is bringing in to report His perspective upon these world events.
When it isn’t making any sense down here, it is up there.

Bill Yount has been a member of Bridge of Life in Hagerstown, Maryland, for the past 36 years, where he is now an elder and a home missionary. He is currently an adviser at large for Aglow International. Bill faithfully served in prison ministry at Mount Hope for 23 years and now travels full-time, both in the U.S. and internationally, ministering in churches and Aglow circles. “Humility and humor” characterize his ministry as he brings forth a fresh word that is “in season,” proclaiming the word of the Lord.
The shofar (or ram’s horn) is often used in his meetings, breaking the powers of darkness over regions, churches and households. The shofar represents God’s breath blowing into the nostrils of His people, reviving them and awakening the lost. Many of God’s messages, which Bill ministers prophetically, come out of his everyday life with his family and friends.
3 Reasons Why you should read Life in the Spirit. 1) Get to know the Holy Spirit. 2) Learn to enter God’s presence 3) Hear God’s voice clearly! Go deeper!
Has God called you to be a leader? Ministry Today magazine is the source that Christian leaders who want to serve with passion and purpose turn to. Subscribe now and receive a free leadership book.
Love For His People, Inc. founded in 2010 by Steve & Laurie Martin. Charlotte, NC USA