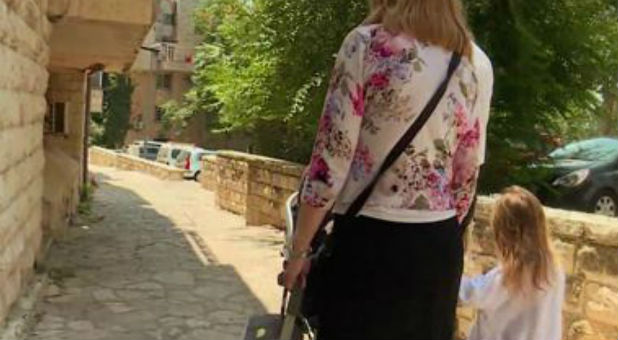 Making ‘Aliyah’: Why Thousands of Jews Move to Israel Each Year

12/16/2016 JULIE STAHL,CHRIS MITCHELL/CBN NEWS
Join us on our podcast each weekday for an interesting story, well told, from Charisma News. Listen at charismapodcastnetwork.com.
It’s called aliyah, Hebrew for “going up,” or immigrating to Israel. Each year, thousands of Jews from around the world resettle in Israel. It can be a tough transition for many from Western nations. So, why do they do it? And who helps them?
To find out, we talked with Neal Brinn, who relocated to Israel with his family just three weeks after he completed 20 years in the U.S. Navy.
“The highest position I had was the commanding officer of the U.S. warship, the USS Carter Hall, which was an amphibious ship about 200 meters long,” Brinn said.
Brinn, his wife, Shoshanna, and their four young children, now live in a religious neighborhood in Jerusalem. Some might say they gave up a lot to live here, but they say they’re home.
Brinn spent his summer accompanying his 4-year-old twins to school on the public bus because they don’t have a car—well, sort of.
“We do have a car,” Brin quipped. “It’s got four wheels; it’s got one seat. Only one person can sit in it and that’s Yudi, who’s 5 months old. The propulsion system is human legs attached to arms. It’s a stroller. That’s our car. It holds everything we need. If we need to go shopping, we can take it everywhere, even up the steps,” he said.
About eight years ago, Brinn’s life took on major changes. He became more religious, met Shoshanna and married. They knew they would come to Israel at some point; they just didn’t know when.
Brinn told us he didn’t know how long he’d stay in the Navy—20 years or 30. “For staying 30 years, I’d make two-point-four more times retirement pay every month, which is a tremendous difference,” he said.
Moving ‘Home’
But the Brinns decided that Israel was their home, so he retired and they made the move right away.
“This is where we feel every Jew needs to be,” Brinn said. “And our children will learn the language so much better at the ages of between 5 months, 3 1/2 and our twins who are 4, than if it was 10 years later.”
They’ve faced some adjustments, however. Brinn said he was astounded by the amount of litter in his neighborhood, and that it’s tolerated. To combat the problem, he has organized a weekly cleaning project called the “Hour of Power,” an idea he got from his time as the executive officer of a ship.
“We’re hoping this will be a habit and stays and can really clean this space up. We go from just picking up litter to be actually cleaning,” he said. “I mean, these stone stairs could look like clean stone as opposed to stones with weeds here and dirt here.”
Why Give Up Life in America?
Some wonder why they would give up life in America.
“I can’t tell you why some people would move, but I can tell you why a Jew would,” Brinn said. “We have a national anthem called HaTikva—which means ‘the hope”—and it says in HaTikva that as long as the heart of the Jew beats—I’m not quoting it exactly, but—as long as the heart of the Jew beats, this 2,000-year dream is just finally being realized.”
Rabbi Yehoshua Fass and his organization, Nefesh B’Nefesh, helped make the dream become reality for Brinn and his family.
“We have this modern-day miracle of the state of Israel that is just unfathomable. It’s fantasy stuff. For 2,000 years of wandering and dreaming and all of a sudden, you get on a plane and change your status and become a citizen of this country. It’s incredible,” Fass said.
Two hundred twenty-three North American immigrants arrived on a flight just weeks after the Brinns, including 75 young people who came to join the Israeli Defense Force, the IDF. One of them was Nefesh B’Nefesh’s immigrant No. 50,000, Rebekkah Glanzer from Brooklyn, New York.
A Feeling of Belonging
“There’s a feeling of belonging here that you really don’t have anywhere else, and I just couldn’t see myself spending the rest of my life any other place. So I’m here,” Glanzer said.
“IDF service is part of what makes Israel such a united country,” Glanzer continued. “It makes everyone feel like it’s really their own. So I didn’t feel I could make Aliyah without contributing or participating in that way.”
Different Reasons Brought Ally Strauss and Zachary Olstein to Israel
“It’s something I’ve dreamed about doing since [I was] 7 years old,” Strauss said. “I think Israel has a right to be a country, and I want to do what I can to make sure it stays a country as long as possible.”
“I went to Poland. I saw the concentration camps, I saw the ghettos. It became so much more real,” Olstein said. “My purpose for coming to the army, I think, is that I want to help protect the one place that I know—God forbid it ever happens—the place that’s safe for the Jewish people.”
Tammy and Gene Berman are from Washington, D.C. They decided to retire to Israel, and summed up the reason for coming home this way: “It’s our destiny, we’re Jewish. America’s a wonderful, fantastic country; I love it. My parents were immigrants to America, but we’re visitors there,” Tammy said. “We belong here.”

Reprinted with permission from CBN.com. Copyright The Christian Broadcasting Network, Inc., All rights reserved.
3 Reasons Why you should read Life in the Spirit. 1) Get to know the Holy Spirit. 2) Learn to enter God’s presence 3) Hear God’s voice clearly! Go deeper!
Has God called you to be a leader? Ministry Today magazine is the source that Christian leaders who want to serve with passion and purpose turn to. Subscribe now and receive a free leadership book.
Love For His People, Inc. founded in 2010 by Steve & Laurie Martin. Charlotte, NC USA