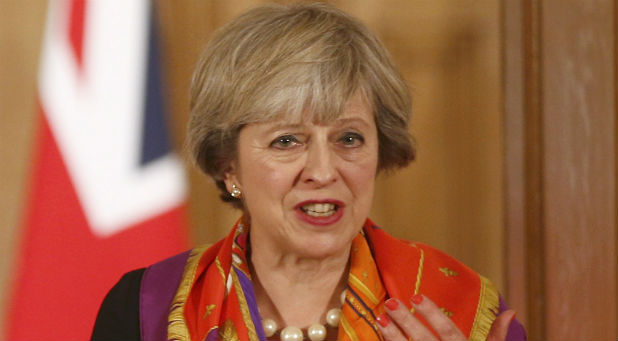 11/30/2016 THE CHRISTIAN INSTITUTE  CHARISMA NEWS
Join us on our podcast each weekday for an interesting story, well told, from Charisma News. Listen at charismapodcastnetwork.com.
Theresa May has said Christians should be able to speak about their faith in the workplace.
Responding to a question in Parliament today, the Prime Minister said the UK has a “very strong tradition” of “religious tolerance and freedom of speech”, and added that our “Christian heritage is something we can all be proud of.”
Fiona Bruce MP had raised concerns that many Christians are worried “about mentioning their faith in public”, after a report by the Equality and Human Rights Commission (EHRC) hit out at organisations which suppress Christianity for fear of causing offence.
Free Speech
The Prime Minister agreed that the ability to “speak freely, respectfully and responsibly about one’s religion” should be a “jealously guarded principle.”
She went on to say: “I am sure we would all want to ensure that people at work do feel able to speak about their faith and also feel able to speak quite freely about Christmas.”
The EHRC’s report, due to be published this week, hits out at organizations that discipline Christians or drop references to Christianity.
Injustice
According to The Mail on Sunday, it references several cases where believers were treated unjustly, including that of Institute client Adrian Smith. Smith was demoted for writing that gay marriage was “an equality too far” on his private Facebook page.
One section is reported as saying: “There is no right in Britain not to be offended and, in our view, respect for people’s right to express beliefs with which others might disagree, is the mark of a democratic society.”
Institute Public Affairs Deputy Director, Simon Calvert, responded to the report, saying: “Christians have certainly felt that their fundamental freedoms have been set aside by the human rights and equality industry in recent years.”
Change Needed
“It’s a relief to see the Commission stand up for freedom of religion as a fundamental right and recognize that it should not be suppressed through fear of offending.”
But Calvert insisted that the current law needs to be amended.
“We have long argued that equality law needs rebalancing so that courts have to take time to weigh up competing rights to see if both sides can be reasonably accommodated.
“Too often the courts come down strongly in favor of the secular liberal side of the argument.”