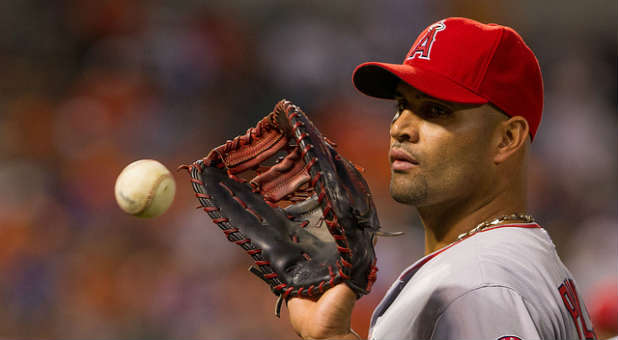 11/23/2016 N. J. SCHIAVI/KEHILA NEWS ISRAEL  CHARISMA NEWS
Baseball star Albert Pujols and his wife Deidre, president of the family’s charitable organization, visited Israel for the first time, spending the past week in the Holy Land.
Pujols, who plays first base for the Los Angeles Angels, and Deidre made this off-season trip to the Jewish state to visit the spiritual sites of the country. The Pujols are strong Christians and very outspoken about their faith.
They are also advocates for people with Down syndrome. The Pujols’ eldest daughter, Isabella (18), has Down syndrome.
One of the Pujols’ stops in Jerusalem was Shalva National Children’s Center, the premiere center in Israel for children with special needs. About 40 percent of Shalva’s participants have Down syndrome.
Though Shalva has been in existence since 1990, in September, the organization opened the doors to its massive 200,000-square-foot center, which includes a semi-Olympic-size swimming pool, a basketball court and a municipal kindergarten for children ages 3 to 6.
Shalva’s programs are offered free of charge, with programs for children with special needs from birth through 21 years old regardless of race or religion. With this new space, Shalva’s programs will expand to include on-site vocational training for young adults, community sporting events and mentorship programs, while maintaining its traditional programs such as early intervention therapies, the after-school program and a respite center that serves 100 children each night.
After a tour of the facilities and a performance by Shalva’s band for Pujols and his wife, the 10-time All-Star gave a quick batting practice for two Shalva teens with Down syndrome and signed autographs for the children.
The Pujols are a dynamo of life-giving endeavors. The Pujols Family Foundation, based in St. Louis, “promotes awareness of Down syndrome and works to support those who have it and their families, aids the poor in the Dominican Republic and supports people with disabilities and/or life-threatening illnesses,” according to its website.
The foundation, founded in 2005, hosts events for people with Down syndrome, including a prom and cooking classes, and has supported the Down Syndrome Association of Greater St. Louis. In 2009, the organization opened the Albert Pujols Wellness Center for Adults with Down Syndrome in Chesterfield, Missouri.
Deidre Pujols, who developed a passion for cooking, started her own cookware line, the profits of which are donated to families in poverty. The couple’s children attend the foundation’s fundraising functions with their parents, and Deidre even took their eldest son on a mission trip to the Dominican Republic.
Pujols was born in the Dominican Republic and immigrated to America in 1996. He was drafted into the Major Leagues in 1999 and played for the Cardinals’ farm team until he was called up to the majors in 2001. That year, he was named Rookie of the Year, and his career took off from there. After 11 seasons, three National League Most Valuable Player titles and two World Series with the Cardinals, Pujols signed a 10-year contract with the Angels in 2011.
Pujols became a believer through the Deidre’s influence shortly after the two met and before his career took off.
“In the Pujols family, God is first. Everything else is a distant second,” he writes on his website. “My life’s goal is to bring glory to Jesus. My life is not mostly dedicated to the Lord; it is 100 percent committed to Jesus Christ and His will. God has given me the ability to succeed in the game of baseball. But baseball is not the end; baseball is the means by which my wife, Dee Dee, and I glorify God. Baseball is simply my platform to elevate Jesus Christ, my Lord and Savior.”
Isabella is the oldest of five children. The others are Albert, Jr.; Sophia; Ezra; and Esther Grace. The family lives in St. Louis.
The couple’s visit to Israel was an inspiration to children with special needs and to believers in the land.

For the original article, visit kehilanews.com.
3 Reasons Why you should read Life in the Spirit. 1) Get to know the Holy Spirit. 2) Learn to enter God’s presence 3) Hear God’s voice clearly! Go deeper!
Has God called you to be a leader? Ministry Today magazine is the source that Christian leaders who want to serve with passion and purpose turn to. Subscribe now and receive a free leadership book.
Did you enjoy this blog? Click here to receive it by email.
Love For His People, Inc. founded in 2010 by Steve & Laurie Martin. Charlotte, NC USA