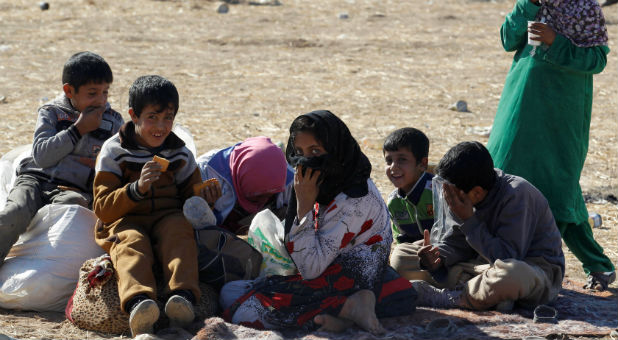 11/18/2016 CBN NEWS
Join us on our podcast each weekday for an interesting story, well told, from Charisma News. Listen at charismapodcastnetwork.com.
Kurdish and Iraqi forces are still fighting to break the Islamic State’s iron grip on Mosul. Meanwhile, thousands of refugees are fleeing from certain death just miles away from the ISIS stronghold and Iraq’s Christians are asking God to restore their land.
CBN News Military Correspondent Chuck Holton described the scene on the front lines in Northern Iraq.
“We’re hearing a lot of explosions and machine gunfire. There are coalition jets circling overhead,” he said positioned just miles beyond enemy lines.
While the scene is full of heavy gunfire, smoke and ground-shaking explosions, it is impossible to ignore the thousands of wounded refugees running for their lives.
“They’ve been coming in groups of 10, 20, 30 even 100, waving white flags and surrendering to the Peshmerga,” Holton said. “Many of them were told by ISIS that if they went to the Kurdish lines they would be beheaded by the Kurds. The refugees said they would rather die by Kurdish hands than by ISIS.”
The tired and wounded refugees do not receive the sword once they reach Kurdish territory; instead, they get bowls of food and glasses of water.
“When they get to the Kurdish lines and find out they are well-cared for and given food and water, they just sometimes break down in tears,” Holton said. “The wounded people we saw just a little while ago included a man whose wife and brother were killed in a U.S. airstrike. His daughter was with him and lost an arm and an eye.”
Although many have escaped, Holton says there are still many trapped in ISIS territory with targets on their backs.
“ISIS has herded thousands and thousands of people in Mosul into where the fighting is and using them as human shields. There are upwards of 700,000 people still trapped in Mosul,” he said.
Matthew Nowery leads Samaritan’s Purse in northern Iraq and he says this is the perfect time for revival.
“This is a dangerous calling. But I ask for prayer for the people themselves that are going to be displaced. That God would soften their hearts now. That they would be receptive to the message that so many of Jesus’ followers are going to be out here in the desert of Iraq to provide,” he told CBN News.
Many Christians throughout the Middle East are fighting the war against ISIS on their knees and are praying for God to sanctify and restore the land the jihadis have defiled.
Friday, Nov. 18, Iraqi Christians are meeting for an event called “Christ Day.” That day will be dedicated to praying over the land defiled by ISIS militants.
Fabian Greche leads a prayer group in northern Iraq and believes God is far from finished with the Middle East.
“We easily get affected by darkness around us. It affects us, but if we look at Jesus and at His Word we see that God wants to pour out His Spirit. He’s coming back for a bride, and He will have one in the Middle East.”

Reprinted with permission from CBN.com. Copyright The Christian Broadcasting Network, Inc., All rights reserved.
3 Reasons Why you should read Life in the Spirit. 1) Get to know the Holy Spirit. 2) Learn to enter God’s presence 3) Hear God’s voice clearly! Go deeper!
Has God called you to be a leader? Ministry Today magazine is the source that Christian leaders who want to serve with passion and purpose turn to. Subscribe now and receive a free leadership book.
Love For His People, Inc. founded in 2010 by Steve & Laurie Martin. Charlotte, NC USA