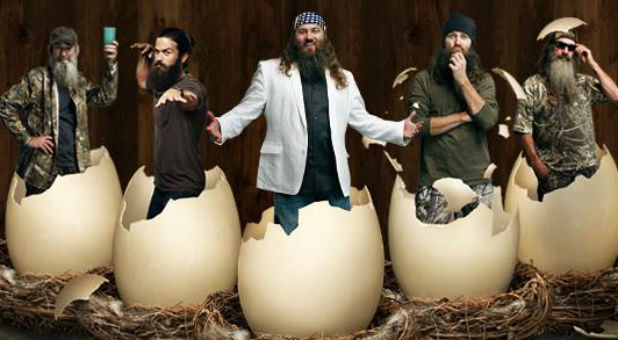 ‘Duck Dynasty’ TV Show May Be Over, but This Is Just the Beginning

11/17/2016 JESSILYN JUSTICE  CHARISMA NEWS
Join us on the new C-Pop podcast where Taylor and Jessilyn discuss, debate and sometimes deride pop culture with a strong sense of humor and a focus on Christ. Listen at charismapodcastnetwork.com.
Duck Dynasty took a faith-filled family in the swamps of Louisiana and catapulted them into our hearts. After 11 seasons, they’re saying goodbye to the silver screen.
With lovable characters like Uncle Si, Miss Kay and the Robertson brothers, the family became a weekly staple in many Christian households, as well as pop culture and even political icons.
Though their A&E run may be over, it seems the family is moving forward in the Great Commission. Here’s what some of the members are up to now:
Phil Robertson: The family patriarch was most recently found campaigning for Donald Trump, who took the election victory earlier this month. Robertson also stars in Torchbearer, where he visits historic sites around the world and makes a case for societies maintaining a strong relationship with God.
Kay Robertson: The family matriarch’s best-selling cookbook continues to fly off shelves as she joins Phil for speaking engagements around the country.
Willie Robertson: The CEO of Duck Commander, who is married to Korie Robertson, frequently campaigned for Donald Trump and recently wrote The American Fisherman.
Korie Robertson: The mom to six publicly begged Christians to vote in this month’s election. Korie’s behind several of the family’s books, including Duck Commander Devotions for Kids, Strong and Kind: Raising Kids of Character, Faith Commander: Living Five Values From the Parables of Jesus and The Women of Duck Commander: Surprising Insights From the Women Behind the Beards About What Makes This Family Work.
Jep Robertson: Married to Jessica, the youngest son of Kay and Phil is often spotted behind the camera filming his family’s antics. He and his wife adopted a baby earlier this year. Jep and Jessica star in a spin-off titled Jep and Jessica: Growing the Dynasty.
Jase Robertson: Jase runs the manufacturing portion of the Duck Commander business. He and wife, Missy, recently celebrated the marriage of their son, Reed. He travels on the speaking circuit, making appearances at Pentecostal churches. Missy is the keynote speaker at events across the country as well.
Sadie Robertson: Willie and Korie’s daughter is arguably in the pop culture spotlight more than any other member of the family. She’s on her Live Original tour right now and recently wrote the fictional novel Life Just Got Real.
Si Robertson: Beloved Uncle Si will star in a new spin-off show, according to the multiple reports. Titled Si-Ral, the episodes will follow Si across the country as he dives into further antics—and possibly the music business?
We’ll miss this family as they transition off our television screens, but we’ll still see them around, impacting culture for Christ.

3 Reasons Why you should read Life in the Spirit. 1) Get to know the Holy Spirit. 2) Learn to enter God’s presence 3) Hear God’s voice clearly! Go deeper!
Has God called you to be a leader? Ministry Today magazine is the source that Christian leaders who want to serve with passion and purpose turn to. Subscribe now and receive a free leadership book.
Love For His People, Inc. founded in 2010 by Steve & Laurie Martin. Charlotte, NC USA
Advertisements In Him we greatly rejoice, though for a little while, we’re distressed by various trials… 1 Peter 1:6 – Richard and Carolyn Hyde from Heart of G-d Ministries July 3, 2020 Lance Wallnau 106K subscribers This week the media have been reporting these bogus stories about President Trump