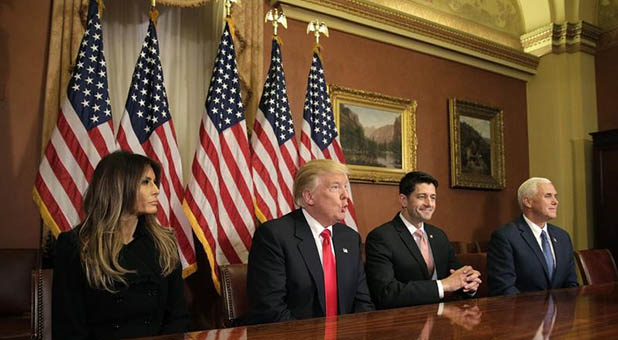 Prophecy: The 2016 Election Is Paving the Way for the Rise of ‘the Daniel Company’
11/17/2016 BOB ESCHLIMAN  CHARISMA NEWS
The election of Donald Trump and Mike Pence last week was ordained by God for the purpose of restoring hope, purity and purpose to our nation, Jeff Jansen, founder of Global Fire Ministries International, recently wrote.
Echoing the sentiments of many evangelical faith leaders, Jansen wrote last week’s electoral victory was a “modern-day political miracle,” the likes of David defeating Goliath. He said no single state turned the election, but rather the prayers of the church, which came in the spirit of 2 Chronicles 7:14.
“Donald Trump was elected to be the 45th president of the United States in a time that is so critical to the soul of our nation,” he added. “God purposed him as His servant, with a special set of skills, power and ability, to break the bars of iron and bronze and to restore hope, purity and purpose to our nation. This would not have been possible if it weren’t for the hidden ‘Daniel Company’ who understood the times and the season and prayed fervently as they understood breakthrough was on the horizon.”
Jansen then goes on to explain how through the prayers of the Daniel Company, God single-handedly rescued our nation. He also explained the authority we have as Christ followers to make Throne Room decrees that can result in powerful change.
He also wrote that a new Daniel Company is rising up, and that Christians need to be prepared:
These new oracle wonder workers will change cities, regions and nations when they speak as the voice of God in the earth with the mighty word of power. They access and release realms of heavenly revelation with the unlimited anointing of power that comes from the presence of the Lord. Nothing will stand before them.
To date, we have seen many waves of revival hit the nations of the earth, but nothing like we are beginning to witness now. God is propelling the maturing body of Christ into a new place on the planet. A Daniel Company is rising with the burning coals of heaven on their lips. Like Moses, they will speak as “God-like ones,” declaring and decreeing the very will of God through their words.
The multitudes will understand who God is as nations are shifted and multitudes come to Christ through demonstrations of power released through prophetic decree. We’ve seen some pretty remarkable things in past revivals, including the Welsh revival, The Great Awakening, Azusa Street, Latter Rain, The Voice of Healing of the 1940s and 1950s, and then later moves of God like the Toronto Blessing, Brownsville Revival and others. Impressive as they were, they were merely “previews of the coming attraction.” They will all pale in comparison to the outpouring of this new season—the outpouring of the Spirit of Revival.
The church is growing into the revelation that we really are God’s representatives on this planet. And as His governmental representatives on the earth we have been given the authority, ability and position to function with full legal kingdom rights to administer the job.
Click here to read his entire commentary.