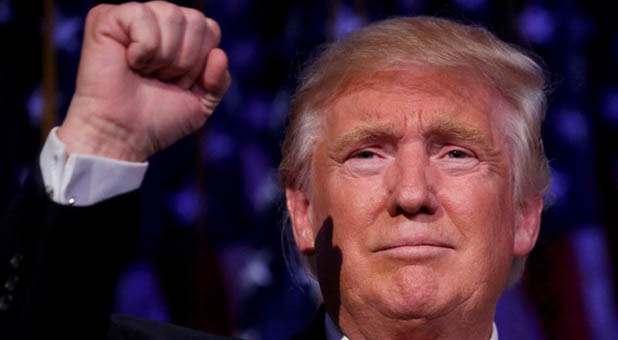 Rabbis: Trump’s Election Divinely Sent to Usher in Second Coming
11/11/2016 BOB ESCHLIMAN  CHARISMA NEWS
According to a new report by Breaking Israel News, several rabbis have concluded President-Elect Donald Trump’s win Tuesday night/Wednesday morning over former Secretary of State Hillary Clinton was “the will of God.”
According to the report:
As the rabbi who oversees the final resting place of King David on Mount Zion, Rabbi Yosef Berger is intimately connected to the spirituality of kingship. For him it was clear what tipped the scales in favor of the Republican underdog.
“I have known for months that Donald Trump would win the elections,” Rabbi Berger told Breaking Israel News. “The gematria (numerology) of his name is Moshiach (Messiah). He is connected to the Messianic process which is happening right now. When he promised to move the American Embassy to Jerusalem, he attached himself to the power of Moshiach, which gave him the boost he needed. If you separate from Jerusalem, disaster will follow.”
When taking the gematria into account, it was clear that Trump had a spiritual edge. As Rabbi Berger pointed out, the gematria for Donald Trump in Hebrew (דונלד טראמפ) is 424, which is equal to the gematria of “Messiah for the House of David” (משיח בן דוד). The Ben Ish Chai, an authority on Jewish law and master kabbalist who lived in Baghdad 150 years ago, interpreted the number 212 as a difficult time for Israel before the Final Redemption. Trump’s gematria is twice that, signifying an ongoing Messiah process.
Rabbi Berger was clear on how this election fit into the process of Messiah. “As the spiritual descendant of the biblical nation of Edom, America has a very important role to play in the Messiah. But in order to be suited for that role, America had to be humbled,” Rabbi Berger stated.
“In order to establish his kingdom, God had to create confusion, a situation in which the best plans laid by the most powerful people, comes to nothing.”