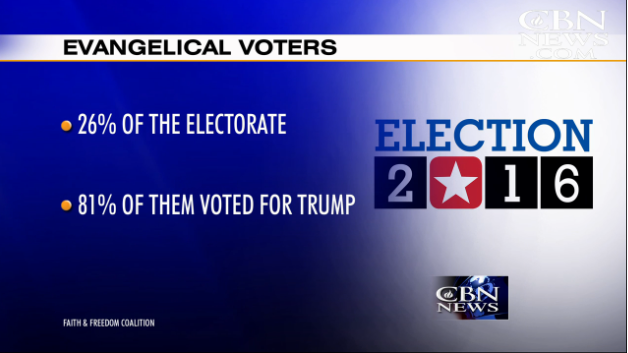 11-11-2016
CBN News Paul Strand
+1
WASHINGTON – Donald Trump earned a lot of support from evangelical voters in this election, more than Mitt Romney did in 2012. Now Christian leaders are sharing their reactions to the Trump triumph, depending on their particular ministry or work.
Ralph Reed set a goal for his Faith and Freedom Coalition to convince a record number of Christians to go the polls on Election Day.
“To have Donald Trump get 81 percent of the evangelical vote, which is higher than Ronald Reagan got, it’s higher than George W. Bush got – and to have Hillary Clinton get a lower share of that vote than Michael Dukakis got is pretty extraordinary,” he said.
Related Down to the Nitty-Gritty: Pressure on Trump to Craft Agenda Brent Bozell of the Media Research Center points to the role the mainstream media played in Tuesday’s results.  Bozell regularly criticizes the liberal agenda of networks and newspapers and believes that’s the major reason they have loss the public trust.
“Advancing Hillary Clinton, but more importantly, trying to destroy Donald Trump…and then with WikiLeaks, we learned that they were actually working with the campaign, which we assumed all along, but the evidence came out,” Bozell told CBN News.
“So the public saw this. The public saw that they too were considered a basket of ‘Deplorables’ in the eyes of the national media.  And it backfired on them,” he explained.
Marjorie Dannenfelser, with the Susan B. Anthony List, helped Trump capture the pro-life vote. She sees a mandate for the anti-abortion agenda.
“That means we’ve got smooth sailing to defund Planned Parenthood, to get a majority vote again on the Pain-Capable Act, that 20-week limit,” Dannenfelser explained. “It means that pro-life Supreme Court justices will be nominated. Those are the commitments. And we’ll put the Hyde Amendment, the No Taxpayer Funding of Abortion law permanently into law.”
In a campaign in which the Left talked about a war on women, many women felt attacked if they didn’t publicly back Clinton. While Penny Nance, head of Concerned Women for America, would like to see a woman president eventually, she’s clear about what the priority should be.
“As the leader of Concerned Women for America, we are more than happy to wait for a female president who represents our values,” Nance told CBN News.
“Concerned Women for America members are jubilant,” she continued. “We’re so thrilled to come out and support a candidate who agrees with us on the Supreme Court, the fact that we’re going to have about 500 lower court judges now who are going to be pro-life.”
Rev. Pat Mahoney with the Christian Defense Coalition decided to go to The White House the morning after the election and pray for whomever won the presidency.
“We can all agree on we want to see our nation strong.  We want to see our nation united. We want to reach out in justice to the poor and needy.  We want to stand for basic values that unite all Americans,” Mahoney said.
So where does the nation go from here?
“This candidate, Donald Trump, and Mike Pence of course, has promised the pro-life movement more than any other candidate in presidential history,” Dannenfelser said.
“We know that the country was much more conservative on social issues than the people who have been leading us,” Nance said. “And now we’re able to put the numbers to that and we’re able to move forward and protect our nation, protect our children, protect the least of these: the unborn.”
Watch report here: Trump Victory
Love For His People, Inc. founded in 2010 by Steve & Laurie Martin. Charlotte, NC USA