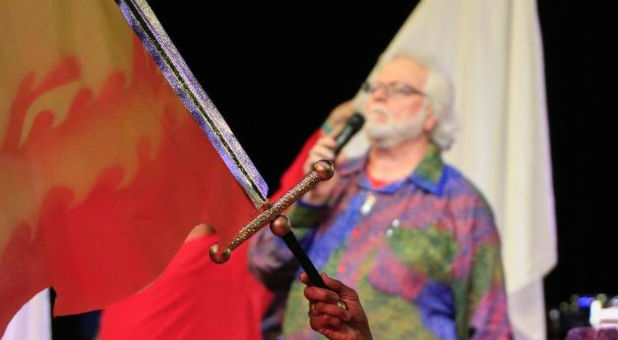 Chuck Pierce: After Election, a Measure of Revival Has Come

11/10/2016 CHUCK PIERCE  CHARISMA NEWS
Dear Changing Ones:
America stands at her greatest moment of change! If we ever needed to watch and pray—the time is now! I am still in Israel. By faith, the Lord told me to come to His nation to decree that the change of an old system in our nation would occur. A broken system filled with the rubble of corruption can change. But God! The joy of being aligned with Israel will now continue in our nation.
I know that many of you might not understand the shift that just occurred. However, on May 31, 2008, God visited me and I asked Him how America could change. He replied, “You will have to learn to play the trump card!” Over the last eight years, I have watched this word manifest. I have written about this over the last eight years in three books: Redeeming the Time, The Apostolic Church Arising, and A Time to a Triumph!
This national election was a beginning for this word being initiated to be fully performed by the Lord! This is not about a man. It is about changing a nation! We must pray for the leader shift that is occurring in United States. Recently, while in Ohio with a Dutch Sheets, the Lord said, “What we see now and in January will not tell the full story. Watch until April.” This is a clear call from the Lord. This is a recent word from the Global Spheres Center on “The Coming Uprising!”
This word was given before the election. I want to encourage all of you in the body of Christ: Go with God! He is a sure thing! The election is not just a night of rejoicing because one candidate won and another lost. God chose to use this election to start a reformation in this nation and return us to a place in Him that we had drifted from. The media will have to repent. The legal justice system will have to be revived. The realignment of nations and allies will have to occur. Covenants that should have not been made will have to overturned. As said in Ezra 9:8, “Yet now for a little while, there has been a favorable response from the Lord our God—leaving us a remnant to escape, giving us a tent peg from His holy place, having our eyes enlightened by our God, and giving us a little reviving in our bondage.” Let us not miss this opportunity to return! The door is before us!