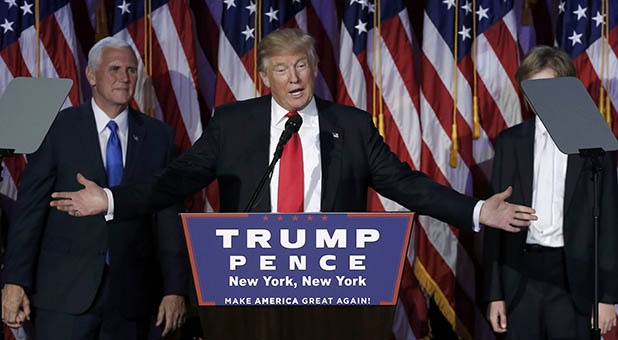 YUUGE!!! Donald Trump Will Be 45th President of the United States

12:30AM EST 11/9/2016 BOB ESCHLIMAN  CHARISMA NEWS
Stop calling Donald Trump the Republican presidential nominee. He’s now the president-elect, and in 71 days, he will be the 45th president of the United States.
With the final votes being tallied in Alaska, Arizona, Michigan and Pennsylvania, Trump was poised to finish with 306 electoral votes to Hillary Clinton’s 232. As of this writing, the media awaited Clinton’s concession and Trump’s victory speeches.
According to Clinton campaign chairman John Podesta, there would be no statement from the former secretary of state Wednesday morning. Podesta said three states were “too close to call,” although several news organizations had declared one or more of those states for Trump, giving him more than 270 electoral votes.
“They’re still counting votes and every vote should count.,” he said. “We’ll have more to say tomorrow.”
Traditionally, the victor waits for the concession speech before giving his own speech. It’s unclear what races the Clinton campaign considers “too close.” As of 2 a.m. EST Wednesday, Trump held the following leads:
Trump also leads in the popular vote—56,763,692 to 55,708,378—by more than 1 million votes.
Clinton may not have wanted to concede Wednesday morning, but Wall Street seems to have decided the race is over. The Dow Jones Industrial Futures index was down 750 points when Pennsylvania’s decisive results were announced.
At approximately 2:50 a.m., Trump came out on the stage to give his victory speech, having been introduced by his running mate, Indiana Gov. Mike Pence. He led off by indicating he had received a concession phone call from Clinton.
Keep checking here for updates as reaction comes in.