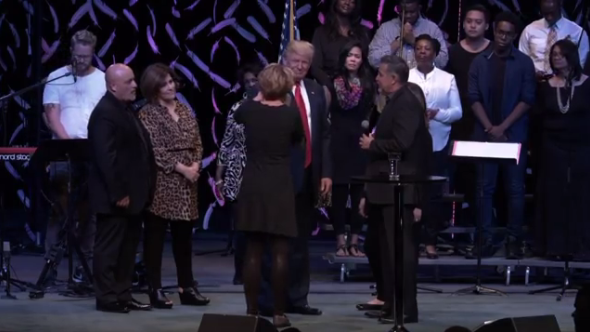 Joining the pastors on the dais, Trump received a prophetic word from Denise, who said:
What I was hearing the Lord say was, “This is My son with whom I am well pleased.” The Lord was showing me how you, Mr. Trump, Donald, as a young—as a little boy—growing up, that you were a good son.
You had a good father, and He was saying, “I have prepared you for this time—for such a time as this.” You have been groomed and prepared for this kind of battle. God has given you the backbone and the courage to say, “Yes” to this challenge. 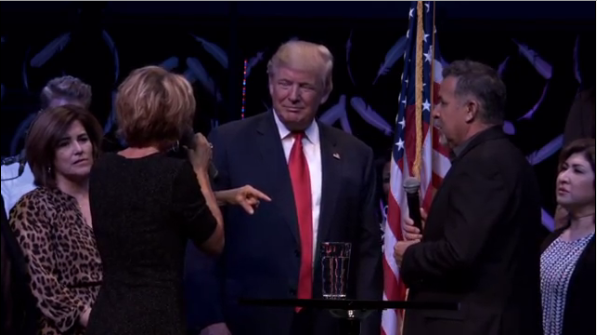 The Goulets then took turns praying over Trump, praying for his safety—both physical and spiritual. They also declared the “arrows” of the campaign had been removed and their effect had been removed from him and his family.
Then, Denise gave a prayer of thanksgiving for raising up Trump for a time such as this:
I thank You that You have prepared him for such a time as this. Lord, You have Your hand on this man and I thank You for it. Lord, I thank You that he’s fearless … and that he is courageous, and I thank You for that boldness that [Trump] has.
You are bold—and this is this comes from the Lord, this comes from God. He has created you—yes, created you in your mother’s womb, and he has created you for such a time as this. And Lord I thank you. Lord, we desire to have that kind of boldness in the Church, in the Kingdom of God.
Yes, we are called to bring Heaven on Earth, and we need the boldness of the Lord to do this, and I thank You that he’s been able to do that. 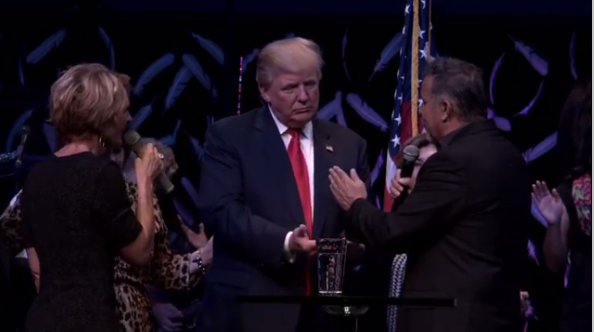