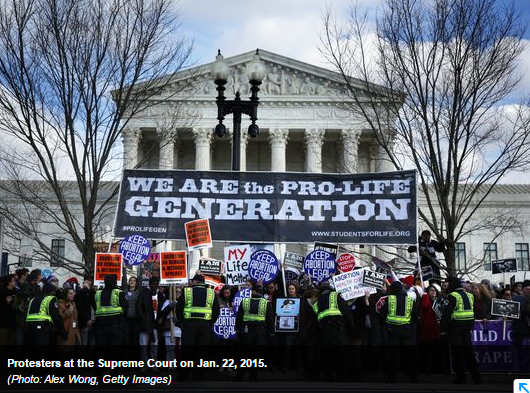 Trump is right about abortion

It is always legal, by federal law, to have an abortion through all nine months of pregnancy.

(Photo: Alex Wong, Getty Images)
Donald Trump, in the third presidential debate, stated that a woman can get an abortion in the U.S. through all nine months of pregnancy. Since then, numerous abortion advocates denied that reality with rebuttals that ignore the law. This current dust-up reveals a political fact; most people don’t know what happened to the law when the Supreme Court legalized abortion in Roe v. Wade and Doe v. Boltonin 1973 for any reason, at any time of pregnancy, in all 50 states, throwing out all abortion laws on the books with the stroke of a pen.
The court said abortion could be limited by the states after viability unless “health” is at issue, defining “health” as emotional well-being, an exception that swallows the ability of the states to limit abortion after fetal viability (the point at which an unborn baby can live outside the womb), a fact documented by numerous legal scholars and in multiple court decisions.
As Harvard law professor Laurence Tribe wrote in 1973: “In Roe v. Wade and Doe v. Bolton (the court) impos(ed) limits on permissible abortion legislation so severe that no abortion law in the United States remained valid.” Legal historian Lawrence Friedman wrote, “In one bold, cataclysmic move the court undid about a century of legislative action. It swept away every abortion law in the country.”   Because of Roeand Doe, the U.S. is one of only four nations (along with North Korea, China and Canada) that allow abortion for any reason after viability.
STORY FROM BANK OF AMERICA
Money 101: What young Americans wish they’d learned
For example, in 1996, a federal appeals court struck down Ohio’s law that limited abortion after fetal viability, and the Supreme Court justices refused to hear Ohio’s appeal. In 2013, the U.S. Court of Appeals for the 9th Circuit struck down the limit on abortions at five months of pregnancy passed by Arizona, and the justices refused to hear Arizona’s appeal in January 2014.

USA TODAY
Church pastor: The truth about my late-term abortion
In 2013, in Indiana, a woman got drugs over the Internet and did a late-term abortion on herself, delivering a baby alive at six to seven months of pregnancy. Although the Indiana Court of Appeals this year threw out most of the charges against her, there was no question that her self-abortion at that time could not be legally questioned. More examples could be cited.
What Trump said is literally true: Late-term abortions are legally available.
The latest figures show that about 1.3% of 1 million annual abortions, or about 13,000 a year, were done in the 21st week of pregnancy of later. And while abortion advocates claim that generally these are done when an infant has some kind of health issue, a former Planned Parenthood director reports that no such requirement existed.
A study published for the Guttmacher Institute in Perspectives on Sexual and Reproductive Health noted that financial issues and concerns about life interference were the reasons cited by most who got an abortion. Writing for Perspectives, authors Diana Greene Foster and Katrina Kimport found “data suggest that most women seeking later terminations are not doing so for reasons of fetal anomaly or life endangerment.”
Yet abortion advocates obfuscate the legal reality of abortion’s late-term availability with five unresponsive rebuttals.
First, they argue that most abortions are actually done in the first trimester, which does not rebut the legality of the procedure in later months.
Second, they contend that abortion providers in some states have voluntarily adopted abortion limits late in pregnancy, which does not rebut the legality of the procedure under Roe v. Wade and Doe v. Bolton in other locations.
Third, they complain that Trump did not properly describe a partial-birth abortion, which again ignores the legality of late-term abortion, however it is accomplished.

USA TODAY
One judge away from losing religious liberty: Hobby Lobby CEO
POLICING THE USA: A look at race, justice, media
Fourth, they say some states have abortion limits after about five months of pregnancy, which ignores the fact that many states have no such limits. In fact, courts have repeatedly blocked such limits, as seen when the 9th Circuit struck down Arizona’s 20-week limit as unconstitutional (as well as Idaho’s). The 20-week limits in other states have not been challenged in court and could face the same judicial fate.
While not all states have someone willing to end the life of a child that could live outside the womb, late-term abortionists operate in a number of states, such as Maryland and Colorado. Guttmacher reports that “16% of all abortion providers perform the procedure at 24 weeks.”
The reality is that it is legal to have an abortion through all nine months of pregnancy, even though not all abortion clinics do such gruesome procedures. Nitpicking over the fine print of the third presidential debate misses the big picture. Legal scholars know that the Supreme Court legalized abortion for any reason, at any time of pregnancy, and the federal courts actively enforce that policy on the states. It’s time Americans understood that, too.
Attorney Clarke D. Forsythe is acting president of Americans United for Life Action and author of Abuse of Discretion: The Inside Story of Roe v. Wade.
You can read diverse opinions from our Board of Contributors and other writers on the Opinion front page, on Twitter @USATOpinion and in our daily Opinion newsletter. To submit a letter, comment or column, check our submission guidelines.
Love For His People, Inc. founded in 2010 by Steve & Laurie Martin. Charlotte, NC USA