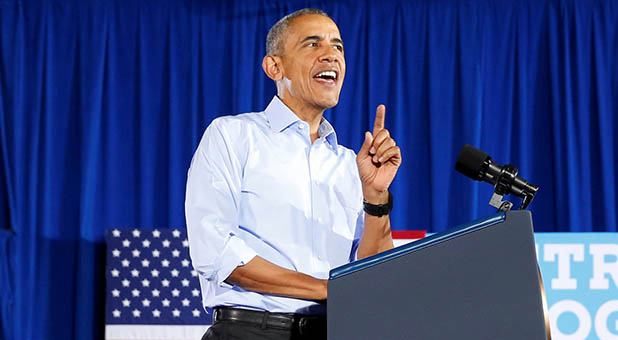 President Obama Threatens to Veto Defense Bill That Protects Religious Liberty
ROGER SEVERINO/HERITAGE FOUNDATION   CHARISMA NEWS   Oct. 28, 2016
On D-Day, Franklin Roosevelt famously asked a country of many faiths to pray that God protect our troops as they “struggle to preserve our republic, our religion, and our civilization” against tyranny.
Given our military’s tradition of defending religious liberty from attack, it is disappointing to see President Barack Obama threaten to veto the military’s main authorization bill if it contains protections for religious freedom.
The National Defense Authorization Act (NDAA) is an annual bill that sets policies and budgets for our nation’s fighting forces and is currently being negotiated by both houses of Congress in conference before a final vote.
Included in the House version of the National Defense Authorization Act is an amendment offered by Rep. Steve Russell, R-Okla., that applies decades-old religious exemptions from Title VII of the Civil Rights Act (1964) and the Americans with Disabilities Act (1990) to federal grants and contracts.
The Russell Amendment is sound policy that will prevent the administration from stripping contracts and grants from faith-based social service providers whose internal staffing policies reflect their faith.
Jewish day schools and Catholic adoption centers, for example, are not liable under Title VII for being authentically Jewish or Catholic, and their staffing policies shouldn’t disqualify them from federal grants and contracts either.
But Obama’s veto threat is actually the strongest proof of why the Russell Amendment is needed. It shows that the president wants absolute freedom to discriminate against religious social service providers that interact with the government—all because many religious organizations won’t endorse the LGBT cause. Congress should say no to the president’s blatant attack on religious diversity.
Undermining Religious Liberty
For decades, the left has attempted to raise sexual orientation and gender identity to special protected status through Congress. Seeing little success using the democratic process, the Obama administration has instead turned to issuing various edicts that misinterpret existing civil rights protections to include sexual orientation and gender identity.
On July 21, 2014, Obama issued an executive order that unilaterally elevated sexual orientation and gender identity to special status for purposes of federal contracts.
As our colleague Ryan T. Anderson pointed out at the time, the order “disregards the consciences and liberties of people of goodwill who happen not to share the government’s opinions about issues of sexuality. All Americans should be free to contract with the government without penalty because of their reasonable beliefs about morally contentious issues.”
The executive order left in place the Title VII religious staffing exemption, and the Russell Amendment merely reaffirms this protection while clarifying that religious organizations have a right to employ people committed to authentically living in accordance with their faith tenets. In short, religious organizations are free to be religious organizations.
But Obama would interpret existing religious protections narrowly in order to make religious groups bend to the LGBT agenda. As seen in the administration’s education and health care mandates on gender identity, in practice, this means requiring employee bathrooms and showers meant for women be opened to biological men who self-identify as female regardless of people’s religious beliefs on the matter. The administration’s proven lack of respect for religious freedom when it comes to sexual orientation and gender identity policies is more than enough reason to keep the Russell Amendment.
Reaffirming Long-Standing Policy Is Apparently Unacceptable
Despite the Russell Amendment’s straightforwardness and precedent, 42 Senate Democrats have written to the Senate Armed Services Committee asking that the Russell Amendment be stripped from final National Defense Authorization Act language during conference negotiations.
The letter states that prospective employees should not be “disqualified from a taxpayer-funded job based on an individual’s religions.” Except that’s not how federal contracts typically work. Existing organizations bid for contracts to produce services or products based on their ability to deliver them, not to provide somebody “a taxpayer-funded job.”
The programs at issue are designed to help the needy in the most effective and efficient way possible, and faith-based organizations have proven that they are often the very best at providing these social services precisely because of their faith-based character.
But moreover, Title VII of the Civil Rights Act already specifically protects religious organizations’ ability to hire based on religion, so the burden is on the objectors to the Russell Amendment to prove why a system that has been affirmed by the Supreme Court and has served religious pluralism well for decades should now be stripped away when it comes to federal contracts.
Will Congress Hold the Line?
The Russell Amendment was included in the House version of the National Defense Authorization Act and passed by a comfortable margin (277 to 147) because it reflects the best of our traditions without taking away anything from anyone.
Congress should not let the president’s veto threat get in the way of passing sound policy, and the Russell Amendment is just that—a commonsense continuation of policy that has served our diverse society well since 1964.
Roger Severino is the director of the DeVos Center for Religion and Civil Society at The Heritage Foundation.
This article was originally published at DailySignal.com. Used with permission.