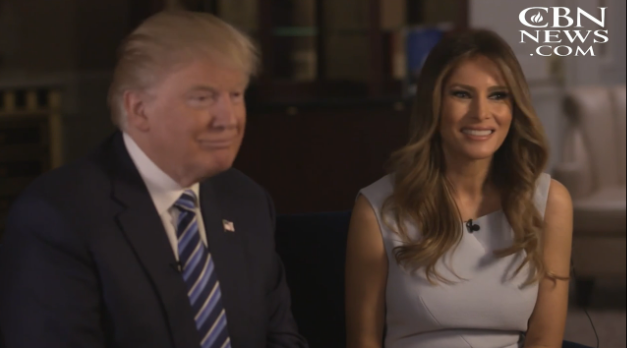 10-27-2016
CBN News  David Brody
+11
WASHINGTON — The Trump family has a new place to stay on Pennsylvania Avenue.
No, not that one… but the new Trump International Hotel. The Republican presidential candidate took credit for opening the doors under budget and ahead of schedule.
He’s hoping that accomplishment can translate to success on the campaign trail but most national pollsters see trouble ahead for him.
Related Meanwhile, Democratic candidate Hillary Clinton is making a play for traditional Republican states, a strategy Trump tells CBN News she may want to rethink.
“You know Hillary wants to run up the score on you? Democrats might be a little cocky,” CBN News Chief Political Correspondent David Brody said.
“I don’t think they’re cocky anymore. Now it looks like we’re leading Florida, could be leading Florida big,” Trump responded.
“They are out playing in Arizona and Utah,” Brody said.
“I think we’re doing very well in Arizona. I mean, we’ll speak in two weeks and see what happens,” Trump said.
Some recent polls show Trump possibly closing the gap. Campaign manager Kellyanne Conway told CBN’s Jenna Browder she’s confident.
“I believe that we will win. I believe that the country is calling, urging for true change not just talking about it in polls,” Conway explained. “Seventy-five percent of Americans now say that they want to take the country in a new and different direction. That’s an unmistakable endorsement and frankly an unmistakeable mandate.”
If Trump hopes to pull this off, he needs one key ingredient and a lot of it.  A source inside the Republican National Committee says it would take at least 80 percent of the evangelical vote to put him in the White House.
“Is it about the base at this point to make sure evangelicals who are a big part of the base that they get out? Because do you believe evangelicals are the ones that kind of brought you to the dance and they are the ones that are going to get you over the top?” Brody asked.
“Well, we’re doing very well with evangelicals and if they vote, we’re going to win the election…had they voted four years ago, and they didn’t, you would have had a different result in the election instead of having Obama who has been catastrophic for evangelicals and a lot of the things that we stand for,” Trump urged.
“What is your message to those that are on the fence and aren’t sure?” Brody asked.
“I just want the people to remember: United States Supreme Court. Whether they love me or like me or don’t like me, we’re going to put great justices, pro-life justices, we’re going to put Second Amendment justices and I think for the evangelicals it’s so important that they get out and vote,” Trump reiterated.
Trump’s wife Melania clearly understands the connection between this voting bloc and her husband’s chance at success. 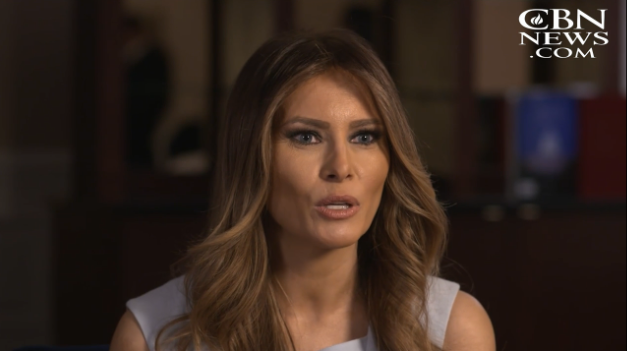 “We want to thank them for their support of my husband. We believe in them. We’re standing with them and we will be strong for them,” she reassured.
Melania Trump has also shown strength in dealing with a media she says has it in for her husband.
“We saw very dishonest and not fair reporting without checking facts and it’s really damaging and hurtful and it’s unfair,” she reflected.
Trump also adds fuel to the fire when he goes off script.
“Who is the real Donald Trump? We’ve seen different versions appear on the campaign trail at times,” Brody asked.
“Well, whatever you see that’s what he is. He’s a fighter, he’s the best deal maker… He has days that he really feels that he needs to fight, fight for himself and that’s how he will fight for the American people,” Melania explained.

As the calendar turns toward November, this fight is coming to an end and Clinton wants to finish strong.

“You know, with 13 days left in this election we cannot stop for a minute. No complacency here,” Clinton encouraged supporters.
You can bet Trump won’t be complacent in these last days. His team is looking above as the homestretch approaches.
“What do you need prayer for?” Brody asked.
“Well, we always say health, that’s the most important because if you have health, you keep going and keep fighting,” Melania replied. 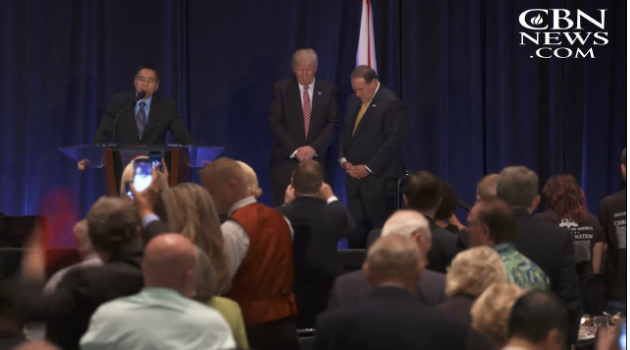 Mike Huckabee with Donald Trump
“I would say I would like them to pray for guidance and to pray for our country because we need prayer now almost more than we’ve ever needed it before,” Trump responded.
It’s safe to say a big prayer will go up when this race finally comes to an end.
*CBN neither supports nor opposes any candidate for public office.
Love For His People, Inc. founded in 2010 by Steve & Laurie Martin. Charlotte, NC USA