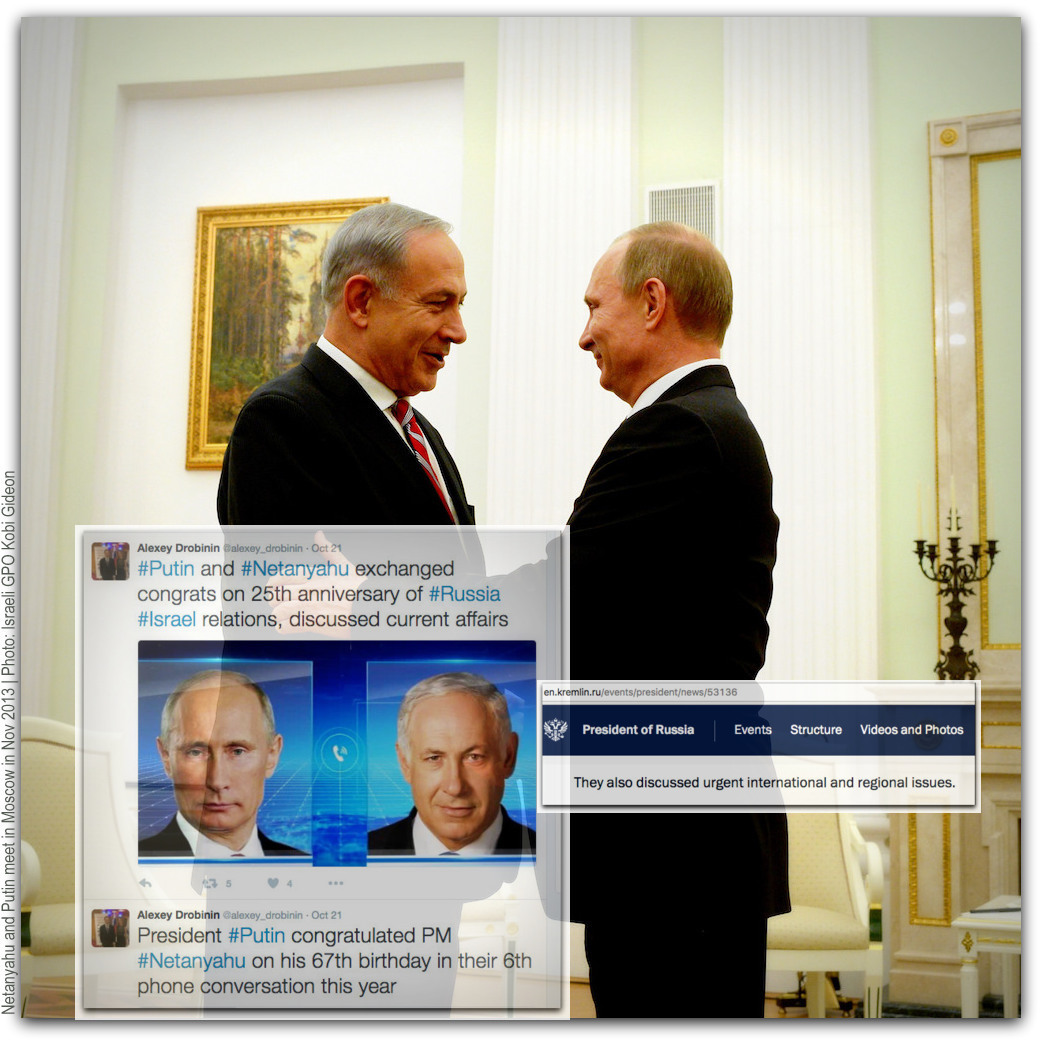 by  Brian Schrauger
News and Views
As Russia’s Northern Fleet approaches Syria, and hence Israel, Putin and Netanyahu found time to talk by phone. Topics included birthday greetings to Netanyahu and 25 years of relations between the countries. According to the Kremlin, “they also discussed urgent international and regional issues.”
✡✡✡✡✡✡✡✡✡✡✡✡✡✡✡✡✡✡
Last Friday was the 67th birthday of Israel’s Prime Minister, Benjamin Netanyahu. How many world leaders sent birthday greetings is unknown. One nation, however, publicized a personal call. According to the Kremlin, Russian President Vladamir Putin phoned and “cordially congratulated Benjamin Netanyahu on his birthday and the Jewish holiday of Sukkot that is celebrated these days.”
In classic diplospeak, Moscow added, “the two leaders exchanged greetings on the occasion of the 25th anniversary (October 18) of the restoration of diplomatic relations between Russia and Israel, and emphasized their interest in further developing multifaceted bilateral cooperation.”
It is virtually certain, however, that the real purpose of the call was in the announcement’s final sentence, a terse eight words:
They also discussed urgent international and regional issues.
Although neither country revealed the specific nature of those issues, some of them, at least, are not difficult to infer.
Russia continues to escalate its military role across Israel’s northeast border in Syria. Much to NATO’s consternation last week, Russia’s entire Northern Fleet passed through the English Channel, only miles from the European continent on the one hand and the United Kingdom on the other.
While, in part, Moscow’s deployment of the Northern Fleet was intended to rattle Europe’s doors, it is virtually certain that its destination is a place Mediterranean where, in accordance with its primary purpose, it will be in firing range, and flight range, of Syria. The inclusion of Russia’s largest aircraft carrier in the fleet, the Admiral Kuznetsov, indicates the potential for even greater warplane traffic in Syria’s already crowded skies.
One of Israel’s concerns is avoiding accidental conflict with Russian jets as it carries out its own missions in the area, especially in Syria. Since Russia made its superpower play, moving into Syria just over a year ago, Israel has clarified to Moscow that it maintains the right to target Iranian arms shipments Hezbollah. Based in Lebanon, another neighbor to Israel’s north, the so-called “party of Allah” is Israel’s sworn enemy. Already armed with upwards of 150,000 missiles to use in a promised war with Israel, Jerusalem is not willing to see the arsenal further grow. It also is unwilling to permit missile armaments in Syria’s portion of the Golan heights, immediately across Israel’s border in that portion of the Golan under its control.
Another probable concern by Israeli leaders is the potential for conflict between its “greatest ally,” the United States, and its “latest ally,” Russia. A recent words between the two countries has provoked fears of a military conflict between them in the Middle East. The United States is currently providing military assistance to Iraqi forces in their attempt to re-take the city of Mosul from Islamic State, also known as ISIS. And only miles away from Mosul, the US has sided with rebels in Syria who desire to overthrow Syrian president, Bashar al-Assad. For its part, Russia is fighting those same rebels in an attempt to keep Assad in power.
Both the US and Russia claim that their ultimate objective in Syria is the defeat, if not the destruction, of ISIS.
As announced in Russian media on 30 September, Moscow is sending its Prime Minister, Dmitry Medvedev, to Jerusalem for a visit on 10 November. Coming on the tailwind of the US presidential election two days before the visit, it is likely that other facets of mutual concern between Jerusalem and Moscow are potential policy changes the new US President will bring to the region.
✡✡✡✡✡✡✡✡✡✡✡✡✡✡✡✡✡✡
Brian Schrauger is the Editor-in-Chief of the Jerusalem Journal. He can be reached at Editor@JerusalemJournal.net
Love For His People, Inc. founded in 2010 by Steve & Laurie Martin. Charlotte, NC USA