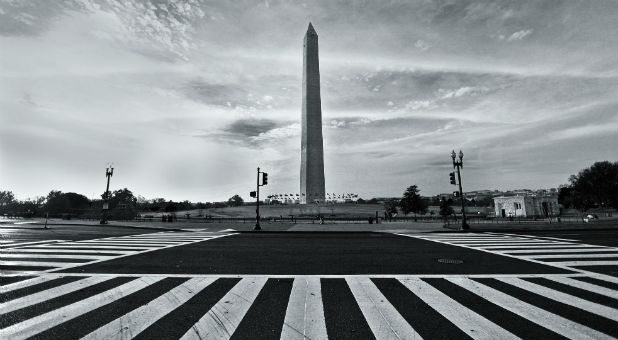 Why Prophetic Voices Say the Nation Shifted on Oct. 21

10/26/2016 STEVE REES  CHARISMA NEWS
Join us on our podcast each weekday for an interesting story, well told, from Charisma News. Listen at charismapodcastnetwork.com.
Some prophetic voices believe the nation shifted, spiritually, Oct. 21, 2016, on what may go down as one of the most important days in American history.
Largely unnoticed, 1,000 Native American Indian tribes from the United States and Canada collectively forgave the U.S. government for breaking treaties with their ancestors during a public ceremony on the National Mall.
The National Day of Prayer for First Nations, held near the Washington Monument, included intercessory petitions, proclamations and declarations of forgiveness by leaders from All Tribes D.C., a fellowship of Christians representing 1,000 American Indians from the U.S. and Canada.
A full-blooded Euchee (Yuchi) Indian, Negiel Bigpond coordinated the first-ever national prayer gathering of Native Americans in the nation’s capital.
Like the annual May observance of the National Day of Prayer, signed into law by President Harry S. Truman in 1952, First Nations intercessors will convene again in 2017 during the third week of October.
Dr. Billy Graham, whose son and daughter have served on the National Day of Prayer Task Force, is a prophetic voice who believes that forgiveness by Native Americans might be part of a spiritual awakening within the nation.
“The Native American has been a sleeping giant,” Graham writes. “He is awakening. The original Americans could become the evangelists who will help win America for Christ. Remember the forgotten people.”
Bigpond agrees that Native Americans have taken a good first step toward aiding national awakening by extending forgiveness to the nation.
“We chose to forgive the U.S., whether it asked for it or not,” said Bigpond, a fourth-generation pastor who offered forgiveness and spoke blessings over the nation alongside other tribal prayer warriors.
Bigpond, who has evangelized on 143 reservations, believes the U.S. has suffered spiritual consequences for breaking treaties with Native Americans.
In Scripture, breaking a vow or treaty brings a curse on the land, and the U.S. government broke every treaty it made with the Native American tribes, according to prophetic voice Rick Joyner, who called the prayer event one of the most important in the nation’s history from his ministry headquarters in North and South Carolina.
“This is very real,” Joyner said. “National injustices are a major issue we’re facing now, whether we want to or not, and this is a big one.”
Bigpond is an apostle at Morning Star Evangelistic Center in Oklahoma, which is affiliated with Joyner’s MorningStar Ministries.
The nation’s crises parallel conditions on the reservations, according to Bigpond, a certified drug- and alcohol-abuse counselor.
“We don’t want the nation or our people to suffer further,” said Bigpond, who holds a doctorate in divinity and is a Euchee tribe chief.
Mary Faus, who represented the Ojibway and Cree tribes at the prayer event, said the unity and power of forgiving a nation that’s never apologized or asked for it was amazing.
“We believe this has shifted the nation and we are already feeling the effects of what was accomplished in D.C.,” said Faus, who is the director of a house of prayer in Pennsylvania and lead intercessor with husband Jon at Hope of Nations Christian Center.
Joyner agrees that forgiveness and love are major weapons in waging spiritual warfare on behalf of the nation.
“This is one of the most noble acts of true Christian charity I have ever heard of by any people group,” Joyner said. “Very few may even know that anything special happened.
“Some of the greatest things happen that way, and only a very few who have their eyes open looking in the right direction, see them,” Joyner said.
Portions of a proclamation posted on the All Tribes D.C. website were read by tribal leaders gathered on the National Mall.
The proclamation reads in part, “We forgive every atrocity and broken covenant ever designed to destroy us as a race of people. We break every curse and renounce every lie purposed to decimate us as human beings.
“We forgive the government, the church and the educational system for the use of residential schools that attempted to destroy our culture and silence our voice as people by stealing our language.
“We stand in the gap for those who are unable or unwilling to forgive, and call upon the Master of Life, to forgive us for harboring unforgiveness, resentment, hatred, bitterness and rage.
“We repent of every curse spoken over America by our ancestors and we release the power of forgiveness to bring healing and the peace of Creator God to this land.
“We declare and decree that our voice will no longer be silenced and that this nation and the world will hear our voice as we speak life and blessings over the Americas and the world.
“We stand in faith believing that our citizenship lies in heaven, and we too, all await the return of our Savior, the Lord Jesus Christ.
“Being all of one mind and heart, having compassion for one another, we declare our love as brothers; not returning evil for the evil perpetuated against us, but on the contrary we choose to release a blessing, knowing that the Father of us all has called us as his children to bless and not curse, that we may inherit a blessing. Amen.”