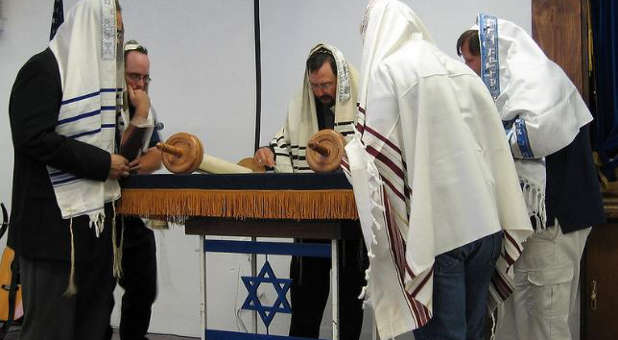 10/24/2016 TOBY JANICKI  CHARISMA NEWS
Recently it was announced that Bob Dylan won the Nobel Prize for Literature. In light of this, I thought I would share about the connection between Bob Dylan and Messianic Judaism.
For many years the background (or “wallpaper”) on my computer’s desktop screen was a blurry picture of a man in desperate need of a haircut, wearing tefillin [worn by Jewish men during daily prayers]. People often say, “Cool picture, but who is that?” When I tell that it’s Bob Dylan at the Western Wall attending his son’s bar mitzvah, I get a mixture of reactions that range from “I didn’t know he was Jewish” to “Who’s Bob Dylan?”
I was first introduced to Bob Dylan at, of all places, a Christian summer camp. Although I was too young to realize the impact Dylan had had on the culture and politics of the 1960s, I thoroughly enjoyed his anthemic songs such as “The Times They Are A-Changin'” and “Blowing in the Wind.”
When I got home from camp. I was pleased to find a few of Bob Dylan’s records among my father’s record collection, but what surprised me the most was the gospel album entitled “Slow Train Coming.” Unbeknownst to me, Dylan had produced three gospel albums from 1979 to 1981 after a born-again experience through which he said Jesus came and visited him personally. I immediately wondered whether he was still a believer.
Along the way I found the book Restless Pilgrim: The Spiritual Journey of Bob Dylan, coincidentally at my father’s house. In it, the author describes a man who has often been misunderstood on his biblical faith journey. The entertainment business would not accept the fact that their cultural icon had become a believer in Messiah Jesus.
While Dylan preached to his crowds in 1979 about the need to repent and turn to the Lord, it was him that fans and critics viewed as Judas. It is not surprising that after only three gospel albums, which included three years of relentless persecution from the media, Bob Dylan hid his face from the public eye. Author Scott Marshall writes in his book of these years:
Perhaps the second verse of Dylan’s 1962 song, “Mixed-Up Confusion,” best summarizes the situation: “Well, there’s too many people/And they’re all too hard to please.”
Yet besides the newspaper critics and the fans, probably the biggest obstacle that Bob Dylan faced was trying to be a believer in Jesus and still actively practice his Jewish roots. As difficult as this is for Jewish people today, it was even harder in the early 1980s. To most people it was either belief in Jesus or Judaism:
Seemingly, every foray into the Jewish arena is interpreted as flat-out return to Judaism, a renunciation of the truth of Jesus Christ that he confessed more than two decades ago.
Here’s a great example of this apparent dichotomy. In the fall of 2001, Dylan spent the holiest day of the year, Yom Kippur, at an Orthodox synagogue in Encino, California. Then he began his tour in early 2002 with the overt gospel tune “Hallelujah, I’m Ready to Go,” a song that speaks of a “wonderful Savior to know.” The next night he opened with the song “I Am the Man, Thomas.” This song covers the story where the Jesus reveals Himself to a doubting Thomas and declares:
“Thomas, because you have seen Me, you have believed. Blessed are those who have not seen, and have yet believed” (John 20:29)
For Dylan, it was not an either/or scenario between Judaism and Christianity. He was comfortable with a world that drew from both.
As I read the story of Dylan’s spiritual life, I began to appreciate him more and more. I saw a man who struggled with his identity much as we do today—stuck in between Christianity and Judaism. As with Dylan, many misinterpret the actions of those in Messianic Judaism as either too Jewish or too Christian.
For me, in Dylan’s words I often find the heartbeat of a man who at times seems to know the Master better than I do:
“Even so, as far ahead of the pack as Dylan traveled, there’s something almost first-century about him. It’s not hard to imagine Bob Dylan sitting under the teaching of the Master on a Palestine hillside, listening attentively, questioning respectfully, analyzing thoughtfully. Could it be that this is where Dylan has been getting his insights all along?”
Over the years, Dylan has continued to infuse the biblical text into his songs. It is estimated that between 1979 and 1990, 67 out of the 80 songs he wrote contained allusions to the Bible. As a person, Jesus Himself was not known to answer questions in a straightforward manner.
So too, with Dylan, who dodges them left and right. He has developed it into such an art that any imitation of this style is often labeled “dylanesque.” It seems the only way to find out what’s in his head is to listen to his music:
If it’s really all right there in the music, then Bob Dylan is without a doubt a man who continues to express faith in Jesus while holding on to his Jewish heritage.

Toby Janicki is a teacher, writer and project manager for First Fruits of Zion (ffoz.org). He contributes regularly to Messiah Journal and has written several books including God Fearers: Gentiles and the God of Israel. You can reach Toby atoutreach@ffoz.org.
3 Reasons Why you should read Life in the Spirit. 1) Get to know the Holy Spirit. 2) Learn to enter God’s presence 3) Hear God’s voice clearly! Go deeper!
Has God called you to be a leader? Ministry Today magazine is the source that Christian leaders who want to serve with passion and purpose turn to. Subscribe now and receive a free leadership book.
Did you enjoy this blog? Click here to receive it by email.
Love For His People, Inc. founded in 2010 by Steve & Laurie Martin. Charlotte, NC USA