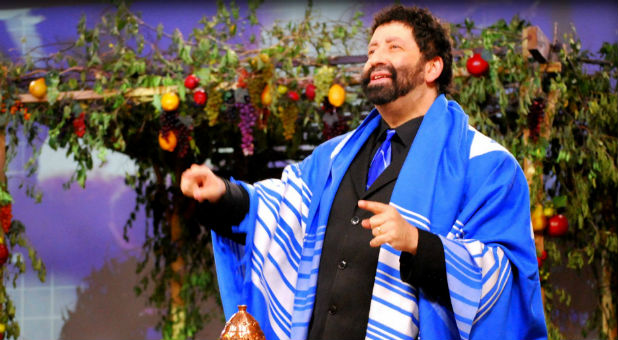 Jennifer LeClaire is now sharing her reflections and revelations through Walking in the Spirit. Listen at charismapodcastnetwork.com.

Jonathan Cahn Opens Up the Mysteries of the End-Times

Jonathan Cahn—New York Times best-selling author of the international sensation The Harbinger—is back, this time mixing potent Bible passages and end-times insight in The Book of Mysteries. The book debuted as a best-seller and continues to surprise Cahn himself.
Charisma News caught up with Cahn to find out the end-times mysteries we should be looking for in part two of this exclusive interview. You can still read part one: The Hidden Secrets of God Revealed in the Book of Mysteries.
Charisma News: The Book of Mysteries opens up mysteries of every kind.  Does it contain any mysteries linked to the end times – and what we should be looking for?
Cahn: Yes.  The Book of Mysteries contains many end-time mysteries and revelations for living victoriously in the last days—mysteries like “The Apostasia,” “The Mystery of Europa,” “The Seven Mysteries of the Age,” and “The House of Spirits.”
Some of these pinpoint where we are in the age, especially concerning the ancient calendar of God, and the next prophetic event—and holy day—that must be fulfilled. But it also includes mysteries to encourage God’s people in the last days.
One of these is called “The Chiasma.” It’s the revelation of the pattern that God often operates in—in which end parallels the beginning – or the end of the age is to match the beginning of the age. In the beginning of the age, there was an Israel in the world.  So now at the end, Israel is again in the world.
In the beginning of the age, you had Jewish believers and a Church that was one with Israel. Now in the end-times, you have that again. But at the beginning of the age, you had an anti-Christian world culture. And so we’re now seeing an anti-Christian world culture coming into existence. In the beginning, there was a great persecution of believers.  We can see the signs of that on the horizon.
But… at the same time, in the beginning of the age there was the Book of Acts, believers on fire for the Gospel, filled with His Spirit, unceasing, unbreakable, unstoppable, overcoming every hindrance, overcoming the Roman Empire changing the course of world history.  That too is appointed for the end-times. We, as end-time believers, have a calling to rise to the mantle of the first believers, the disciples, the apostles—and the anointing to do just that.
Charisma News: How does this book and its mysteries apply to our everyday lives?
Cahn: Woven through The Book of Mysteries is a narrative. It opens up as a man travels into the desert and encounters a man simply called “the teacher.”
The teacher takes him on a one-year journey through the desert, a one-year odyssey through desert mountaintops, hidden caverns, secret chambers of scrolls and ancient books, and more.  The reader is thus taken on a journey with them.
Each day, the teacher brings forth another mystery of God. But it’s not just about being blown away by the mysteries of God—it’s about applying the mysteries to transform your life. So at the end of every mystery, the teacher gives the disciple a mission, a specific way to take the mystery and apply it to his life. So the mission is really for the reader to transform his or her life. I believe that if the reader goes on the journey and takes the mysteries to heart, to apply it to life, it will literally transform their lives.
Charisma News: How did this journey change you or open your eyes?
Cahn: I wrote it mostly from midnight to six in the morning. What surprised me is that at the end, every morning, it left me feeling as if I had been changed, strengthened, revived, touched by God.
The effect of The Book of Mysteries is still surprising me. Early on I began hearing how believers were giving the book to their non-believing friends—and reporting that their friends came to salvation reading it.
I was being interviewed on television by a man who is known to virtually every American, believer or not. He’s been ministering for the Lord for probably half a century. He started reading on the air, the very first mystery. His eyes welled up with tears, and he shared how it changed his life.  It surprises me … and it’s as if I didn’t write the book. But that’s what it’s all about

Jennifer LeClaire is senior editor of Charisma. She is also director of Awakening House of Prayer in Fort Lauderdale, Florida, co-founder of awakeningtv.com, on the leadership team of the New Breed Revival Network and author of several books, including The Next Great Move of God: An Appeal to Heaven for Spiritual Awakening;Mornings With the Holy Spirit, Listening Daily to the Still, Small Voice of God; The Making of a Prophet and Satan’s Deadly Trio: Defeating the Deceptions of Jezebel, Religion and Witchcraft. You can visit her website here. You can also join Jennifer onFacebook or follow her on Twitter. Jennifer’s Periscope handle is @propheticbooks.
3 Reasons Why you should read Life in the Spirit. 1) Get to know the Holy Spirit. 2) Learn to enter God’s presence 3) Hear God’s voice clearly! Go deeper!
Has God called you to be a leader? Ministry Today magazine is the source that Christian leaders who want to serve with passion and purpose turn to. Subscribe now and receive a free leadership book.
Did you enjoy this blog? Click here to receive it by email.
Did you like this article? You’ll enjoy Jennifer LeClaire’s book, The Spiritual Warrior’s Guide to Defeating Jezebel
Love For His People, Inc. founded in 2010 by Steve & Laurie Martin. Charlotte, NC USA