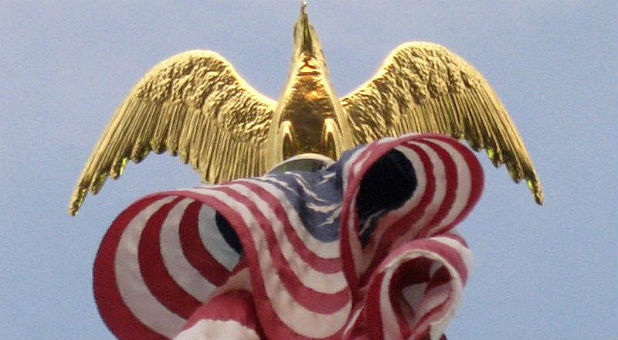 10/19/2016 MILTON SMITH  CHARISMA NEWS
Once upon a time, in America, there was Truth.
A bottom line. A common denominator. A measure without flaw. An absolute. A plumb line. Black and white. Eternal in weight. A light shinning in the dark. The perfect balance. Reality profoundly zenith above and beyond all opinion. Something to build upon. Something to trust without fear. More than an ideal.
Strong enough to bring down the mighty and exalt the lowly. Not subdued by the sands of time. Gentle enough to embrace a newborn, and yet stalwart enough to bare the sword for freedom. Strength in the heat of battle. Courage when others scatter. That which conforms to final Reality. That’s what Truth is.
Many today mimic the words of Pilate: “What is Truth?” Jesus said: “I am the truth!”
Abraham Lincoln said, “Sir, my concern is not whether God is on our side; my greatest concern is to be on God’s side, for God is always right.”
I heard a report recently that said approximately 40 percent of the U.S. population may be suffering from some form of mental illness.
Anxiety is at the top of the list. People fear because of no absolutes in their lives. Removal of the Bible and prayer from our schools has abolished our moral compass. Psychological mind games have been perpetrated on our children.
“Right is no longer right. Wrong is no longer wrong!”
Everything is a blurred line, a “perhaps” or “maybe,” but not absolute. We have a generation of people today who are more informed about sex, gays, drugs, iPhones, rock music and the internet than they are about history, math, government and commonsense living.
Jesus said: “You shall know the truth, and the truth shall set you free” (John 8:32).
People don’t have to be tormented in their minds any longer. Jesus and His Word are the only true reality on Earth. Until we come to grips with this fact, solutions will be obscure or altogether fleeting. Much of the media is nothing but a culture of corruption.
So called “reporters” are masters of deception. Truth to them is a dangerous threat! In this day and time if you’re truthful, “you’re a fanatic, a bigot, a racist, a right-wing extremist and a major threat to society.” The fact is, the mainstream media is one of the most dangerous culprits in the devil’s arsenal! In deciding who you’re going to vote for in this upcoming election, ask yourself: What is the “Truth” about some of the major issues we are facing as a nation?
Does God hate abortion? Yes! Did God institute marriage between a man and a woman? Yes! Did God instruct Israel to build a wall? Yes! Are Christians and Jews being murdered by terrorists in America? Yes! Is immorality being forced upon us? Yes!
God does not vote. We do. He gave us that responsibility!
Prayer is not enough! We must vote for the platform that represents God’s truth! Under the old covenant, God appointed kings. Today He leaves the appointing of our leaders entirely up to us! Christ is the head and we are the body. He said the government is upon His shoulders! We are His shoulders! He needs us to occupy until He returns! America is imploding and the church is the only one who can save the nation. This is the most critical election of our life time! If we don’t vote, we reassign our mandate from God to the enemies of this world. What would Jesus do?

Dr. Milton Smith is a teacher/evangelist. He has ministered on prayer, healing, faith and numerous other subjects by radio, television and the printed page. He deeply loves God and country and believes that we each have an obligation to uphold the great freedoms that God has given us. Visit his new page, facebook.com/faithchurchonline.
3 Reasons Why you should read Life in the Spirit. 1) Get to know the Holy Spirit. 2) Learn to enter God’s presence 3) Hear God’s voice clearly! Go deeper!
Has God called you to be a leader? Ministry Today magazine is the source that Christian leaders who want to serve with passion and purpose turn to. Subscribe now and receive a free leadership book.
Love For His People, Inc. founded in 2010 by Steve & Laurie Martin. Charlotte, NC USA