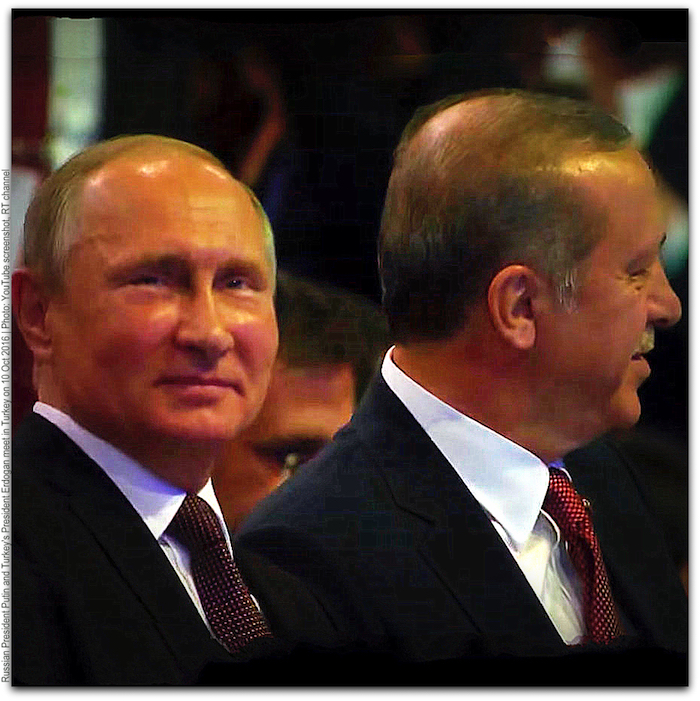 RUSSIA AND TURKEY “MOVING FAST” AT END OF OBAMA PRESIDENCY

According to one assessment by Israeli intelligence, Russian President Vladamir Putin and Turkey’s President Tayyip Erdogan are scrambling to take advantage of the power vacuum left in the Middle East by US President Barack Obama. As Moscow soldifies it superpower presence there, it is already carving up a portion of Syria for shared control with Ankara.
✡✡✡✡✡✡✡✡✡✡✡✡✡✡✡✡✡✡
Last Friday US President Barack Obama told his country’s military leaders that, instead of arming rebel groups in Syria in their stand against the country’s ruthless despot, Bassar Assad, Washington was going to negotiate with Russia, the superpower fighting to keep Assad in power.
According to Israeli intelligence news service, DEBKAfile, Obama’s “high words” and “recriminations” about the “unspeakable horrors” Assad has inflicted on his own citizens, were always empty. He was never serious about providing rebels “the anti-air weapons they need to shoot down Russian and Syrian warplanes blitzing them.”
In fact, US options in Syria are rapidly diminishing. There is no longer a way to get missiles to rebel groups. Erdogan will not allow delivery via Turkey.
Why?
Because Putin is making him an offer he cannot refuse: shared control of a Turkish “security zone” in northern Syria. In effect, it is an offer from Moscow that will carve away a huge chunk of the beleaguered state. As a de facto victor sharing spoils, Russia’s chutzpah is an irresistible lure for Erdogan. But one of the barbs holding the lure when he bites requires Turkey’s further separation of ties, if not severance of ties, with the US and Europe.
Ostensibly, Moscow is supporting Assad and has allied with Iran to this end. But Erdogan opposes Assad. Why then is Russia making the offer? By elevating Erdogan above the US and Europe as the world’s voice against Assad while offering northern Syria as a “security zone,” Moscow further removes Western influence in the region, putting in its place a puppet it has bribed.
Vis-a-vis Ankara, Russia’s alliance with Tehran is playing both sides against the middle, a geopolitical focal point that, for now, is Syria. Russia’s advantage is that it becomes the superpower “godfather” of the Middle East prospering from all its warring players who come to it seeking favors.
How serious is the pending deal between Moscow and Ankara?
DEBKAfile’s intelligence sources reveal that under discussion is the installation in Turkey of a system of advanced Russian missiles linked to the Russian anti-air missile shield under construction in Syria.
Turkey would thus become the first member of NATO to arm itself with a Russian anti-air missile shield.
Why is this happening now and what are the real objectives? DEBKAfile offers an explanation.
Putin and Erdogan are moving fast to cash in on President Obama’s repugnance for military intervention in Syria and his waning powers at the tail end of his presidency. Furthermore –
a) Neither is configuring Syrian President Bashar Assad into their calculations. They are going forward with their plans while ignoring him and his drastically diminished army as factors worth consideration.
b) Their objectives are similar and interlocking: Both are intent on developing their respective enclaves in northern Syria, Moscow for a long-term military presence in the country: likewise, Ankara.
✡✡✡✡✡✡✡✡✡✡✡✡✡✡✡✡✡✡
Brian Schrauger is the Editor-in-Chief of the Jerusalem Journal. He can be reached at Editor@JerusalemJournal.com
Love For His People, Inc. founded in 2010 by Steve & Laurie Martin. Charlotte, NC USA