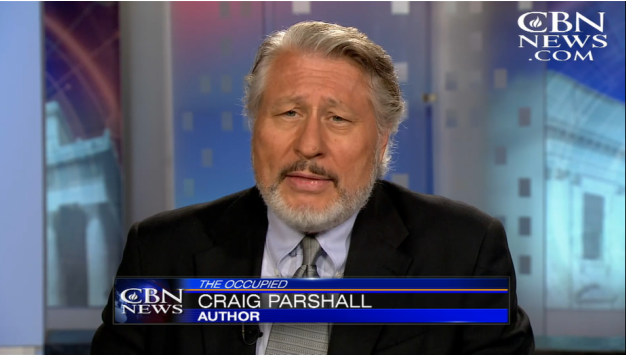 CBN News 10-16-2016
New York Times best selling author Craig Parshall is giving readers insight into the supernatural in his new book “The Occupied.”
Parshall, a leading counsel at the American Center for Law and Justice, is no stranger to fiction writing. “The Occupied” marks his twelfth book in a riveting suspense thriller novel series. But he says this new book is different because he delves deeper into the supernatural than ever before.
“There is such an influx of the supernatural in our entertainment world,” Parshall says. ” So I decided it was time to address this from a fiction stand point but maybe from a little different world view coming from a biblical world view.
The novel’s main character, Trevor Black, is a high-flying criminal defense attorney who experiences a strange turn of events that leave him with the ability to see the supernatural. Black soon realizes he is surrounded by dark forces and can look into the very face of evil.
Parshall says his novel is more than just a fantastical tale, but rings true in real life too.
“I don’t consider myself a biblical scholar,” he said. “But the Bible does say that the gift of discernment is one of those gifts…The gift of discernments determines our ability to determine what spirits are from God and what spirits are from the dark side.”
His novel comes at a time when Americans are leaving organized religion in large numbers, but are increasingly becoming more spiritual.
A Pew Research study recently found that though the number of Americans who believe God exists is decreasing, an increasing number of people say they “often feel a deep sense of spiritual peace” and express a “deep sense of wonder about the universe.”
Parshall Christians should use this increased interest in spirituality as a chance to direct people to the gospel.
“There is a lot of confusion going on there. And there’s a dynamic that I think is an opportunity for us to clear the smoke about things like demon possession and the influence of what Paul in his letter to the Ephesians calls the world of flesh and the devil,” he says.
Parshall hopes non-Christians who read his book will not only adopt a biblical understanding of the spiritual realm, but make a decision to follow Christ.
“Really there are only two kingdoms. One is the kingdom of light and Jesus is the King of that, and then there is a dark kingdom very much at work in the world of the flesh,” he says. “And they have to choose when the time is right and the time is now.”
Watch here: Craig Parshall interview
Love For His People, Inc. founded in 2010 by Steve & Laurie Martin. Charlotte, NC USA