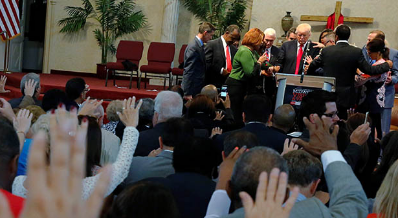 9/22/2016 BOB ESCHLIMAN  CHARISMA NEWS
Wednesday, Donald Trump met with pastors at the Cleveland Heights, Ohio, church of his friend and supporter, pastor Darrell Scott.
There were a lot of headline-grabbing moments—particularly one in which the pastors laid hands on and prayed for the Republican presidential nominee and another when he expressed concern over the previous night’s shooting of an African-American man in Tulsa, Okla.—but you wouldn’t know that by scanning the headlines. No, the mainstream media instead focused on a slip-of-the-tongue and a lie.

Don King introduces Donald Trump
While introducing Trump, former boxing promoter Don King was sharing a story that related to the subject of the event—better racial relations—when he mentioned advice he once gave to Michael Jackson. As he noted as he was relating the story, he told the audience he had originally used the “N-word,” but replaced it in the church setting with “negro.”
Except one time, when he briefly used the N-word before correcting himself.
The audience let out a collective groan, followed by a brief chuckle. Almost immediately, the liberal mainstream media put out the narrative that Trump laughed at a racially insensitive comment from a convicted murderer.

The video, however, tells a different story.