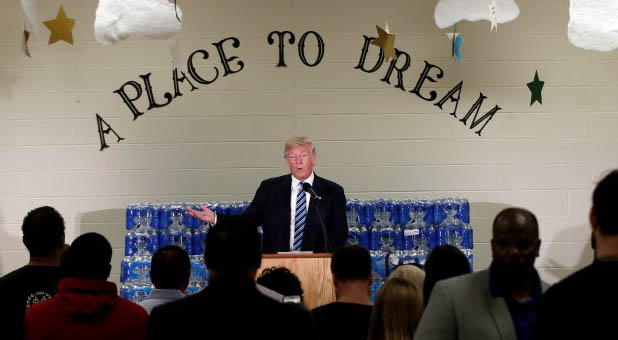 Donald Trump’s Pro-Life Pledge is ‘Yuge!’
9/19/2016 BRYAN FISCHER/AMERICAN FAMILY RADIO  CHARISMA NEWS
Voters who have wondered where Donald Trump stands on the abortion issue need wonder no longer.
Trump today made perhaps the most pronounced pro-life move a presidential nominee has ever made by declaring a specific pro-life platform for his presidency and putting a prominent and unapologetic pro-life leader in charge of his pro-life coalition.
The level of specificity in his presidential pro-life agenda is virtually unheard of. Most candidates try to play it safe by trotting out pro-life bromides and hoping that will satisfy social conservatives.
Not Trump, not this time. Here are the specific things he pledges to do if elected president:
This is a spectacular list. He pledges to make the sanctity of life a qualifying issue for any potential Supreme Court nominee, which is as it should be. The Founders identified the “right to life” in the Declaration as an unalienable right granted to every human being by the Creator. The Constitution itself reaffirms the right to life explicitly in both the 5th and 14th Amendments.
The United States was founded on the premise that this right is the very first of the rights God has given to man. No human agency or authority has a right to deprive another human being, including the pre-born, of this right since it is a gift from God.
It is not just a human and civil right, it is a legal and constitutional right. A judge who does not recognize the right to life is unfit by definition to serve on any judicial bench anywhere in the United States at any level at any time.
Trump also pledges to prohibit abortions after 20 weeks of gestation, defund Planned Parenthood (which currently gets $534 million every year in crony socialist subsidies), and permanently ban taxpayer-funded abortions.
How do we know this is more than empty rhetoric? By his appointment of Marjorie Dannenfelser to head up his pro-life coalition, Trump has put a name and a face to his pro-life commitment. Ms. Dannenfelser, as the head of the Susan B. Anthony List, has faithfully fought the good fight to protect innocent life for over two decades, and she has fought it well.
Naming her to head up his pro-life effort is like dropping a live grenade into the pro-choice crowd. They will freak. They will fume and foam at the mouth. They will return withering fire. It will be Armageddon.
Trump is smart enough to know the firestorm his appointment of Dannenfelser will create. It is surely a reassuring sign to pro-lifers that he is undeterred and determined to forge ahead through the flames.
This platform headed by this chairwoman leaves absolutely no doubt that voters will have a clear-cut choice on November 8 between the pro-death extremism of Hillary Clinton and the pro-life commitment of Donald Trump. Voters who have said there is no fundamental difference between the two candidates cannot say that any longer.
There are defining and clarifying moments in every presidential campaign. This is that moment for 2016. The die has been cast, the colors are clear, and the choice is plain.
Bryan Fischer is host of the two-hour weekday “Focal Point” program on American Family Radio.