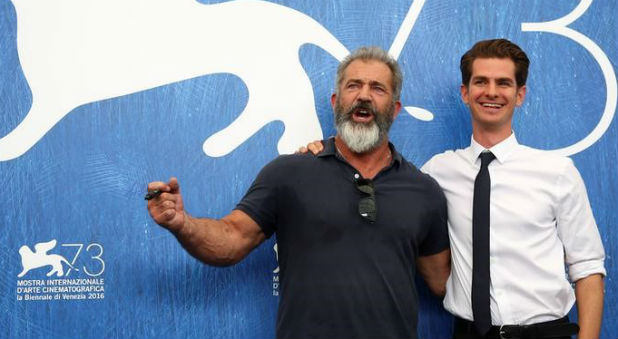 This Violent, Gruesome Mel Gibson Movie Could Be the Next Faith-Based Hit

9/7/2016 JIM DENISON  CHARISMA NEWS
People are talking today about the new Apple iPhone, congressional debates over legislation to battle Zika, and Gretchen Carlson’s $20 million settlement with Fox. But the news that most caught my eye this morning has to do with a movie that won’t be in theaters for two more months.Hacksaw Ridge is Mel Gibson’s new film. It tells the true story of Desmond Doss, a World War II army medic who refused to bear arms but received the Medal of Honor after he saved dozens of his fellow soldiers. The movie was shown at the Venice International Film Festival last Saturday. According to USA Today, the audience gave Gibson a 10-minute standing ovation when the film ended.It was my privilege to see Hacksaw Ridge at a private showing a few days ago, then participate in a discussion with Gibson. I don’t remember ever being as moved by a movie as I was by his film. Looking back, I can identify three reasons for my response. Part of my reaction was the realism with which Gibson depicts the violence of the battle scenes. Hacksaw Ridge is a cliff-like formation on the island of Okinawa, Japan. It was the scene of a two-week struggle between U.S. and Japanese soldiers. Gibson told our group that he depicted the war violence with such realism in order to demonstrate the atrocities Doss faced and the courage he displayed.A second reason for my visceral reaction is the fact that my father, a World War II veteran, fought with the Army in the South Pacific. He would not discuss what he experienced with our family. Like so many veterans, he could not put into words what he went through. I have visited several World War II museums and had a sense of what the Pacific theater was like, but the movie brought home my father’s suffering in a way that moved me deeply. It made me realize again the immeasurable sacrifice so many continue to make in defending our nation and our freedoms around the world.A third factor is the story of Desmond Doss himself. His commitment to his Christian faith and specifically to nonviolence resonated powerfully throughout the film. He risked his life in the most horrific circumstances imaginable to save his fellow soldiers and to serve his Lord. I agree with Greg Laurie: “This is the most positive portrayal of a Christian in a mainstream film that I have seen since Chariots of Fire.”I hope you’ll see Hacksaw Ridge when it opens in theaters Nov. 4. As I have noted, the war violence it depicts is very realistic. But the story it tells is truly one for the ages.During our group discussion, I asked Mel Gibson why he chose to make the film. He explained that Desmond Doss’ heroic faith so moved him that he felt compelled to tell his story to the world. He noted that more than 80 percent of Americans identify as Christians, yet Hollywood very seldom presents our faith in a positive light.Our culture deserves to see authentic Christianity. “How then shall they call on Him in whom they have not believed? And how shall they believe in Him of whom they have not heard? And how shall they hear without a preacher?” (Rom. 10:14). Desmond Doss was willing to pay any price to follow Jesus. Now it’s our turn.

Jim Denison, Ph.D., is founder of the Denison Forum on Truth and Culture, a non-sectarian “think tank” designed to engage contemporary issues with biblical truth. Join over 100,000 who read Dr. Denison’s daily Cultural Commentary:denisonforum.org/subscribe . For more information on the Denison Forum, visitdenisonforum.org. To connect with Dr. Denison in social media, visittwitter.com/jimdenison or facebook.com/denisonforum.
3 Reasons Why you should read Life in the Spirit. 1) Get to know the Holy Spirit. 2) Learn to enter God’s presence 3) Hear God’s voice clearly! Go deeper!
Has God called you to be a leader? Ministry Today magazine is the source that Christian leaders who want to serve with passion and purpose turn to. Subscribe now and receive a free leadership book.
Love For His People, Inc. founded in 2010 by Steve & Laurie Martin. Charlotte, NC USA