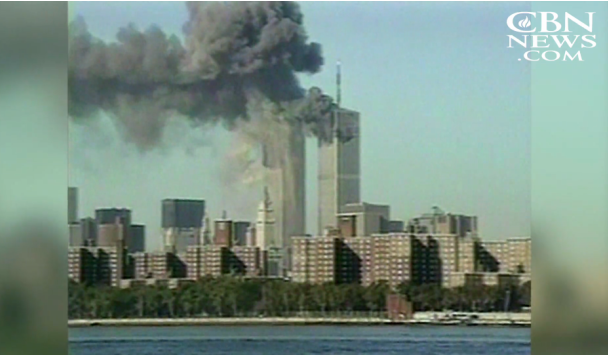 09-10-2016
CBN News Mark Martin
+1
NEW YORK, N.Y. – September 11 is a time to remember the thousands of victims who died in the 2001 terrorist attacks. It’s also a day to offer thanks for those who miraculously survived.
Jean and Dan Potter live a peaceful life in a quiet, suburban town in New York. It’s a stark contrast to 15 years ago, when the couple was living in a Manhattan apartment just a few blocks from the World Trade Center. 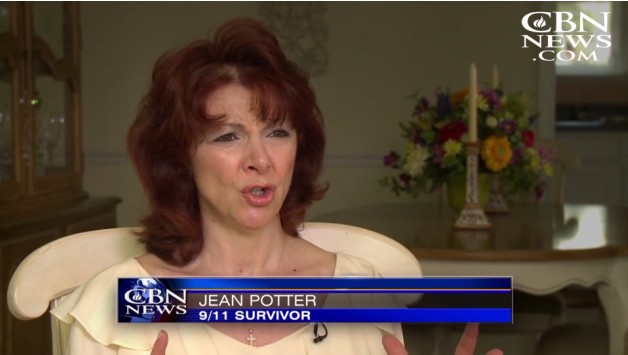 Jean worked on the 81st floor of the first tower hit on the morning of 9/11.
Related 9/11 Survivor Gives Back to God Messages Amidst Chaos
“All of a sudden, this massive explosion rocked the building, and we literally swayed from side to side,” Jean told CBN News. “And what first came to me is, ‘This is not your time. We are with you. Your brother is with you.’ I lost my brother in 1999.”
Jean believes it was the voice of God — loud and clear — a message in the midst of chaos.
“You’re thinking, ‘Is this building going to fall? And I’m up 81 flights. How am I getting out of here?'” she explained.
Jean made it to the staircase as the floor became engulfed in flames.
“My heart was palpitating a mile a minute as I was going down the staircase,” she recounted. “And what also came to me is, ‘You and Dan will be blessed with a beautiful life. You will go north.'”
“And I saw like green trees. This is all while this is happening, and I’m in a very nervous state, but the messages were coming in,” she said.
Jean believes God was reassuring her and prodding her to keep moving down the staircase.
Monumental Loss
“I would say in the 20s, we start seeing firemen, which gave us all a sense of relief,” she continued about her trip down the flights of stairs. “One of whom was Vinny Giammona, who was my husband’s lieutenant at Ladder 5, and I grabbed his arm.”
“I said, ‘Vinny be safe,’ and I will never forget the look on his face that day,” Jean recalled. “It would have been his 40th birthday, and he left behind a wife and four children, four little girls who are now grown. But I will never forget the look on his face.”
Lt. Vinny Giammona was one of 343 New York firefighters who died that dark day. Jean’s husband, Dan, a firefighter at the time, knew 60 of them.
When the terrorists struck, he was on Staten Island but quickly raced to Manhattan to make sure Jean was safe, not knowing that she made it out of the North Tower before it collapsed.
It wasn’t until he was a block or two away that he realized the magnitude of the situation.
“There’s different-sized body parts,” Dan recalled. “There’s big pieces, and there’s small pieces, and it’s all over the place.”
Dan arrived at ground zero to help and had to take cover when the South Tower collapsed — and later, the North Tower.
“It sounded like a freight train, maybe a hundred times more, and you just figure with that amount of noise, and you know it’s coming down around you. It’s just a matter of time,” Dan told CBN News.
Debris and concrete pelted Dan, but he says God kept him alive, and “the big hit” never came.
Praying for Help
Covered in ash, the battered firefighter refused to give up his search for his wife and went back to their apartment.
Dan pounded on the door, but no one answered. It was then he thought that he had lost Jean. The overwhelmed firefighter then left the building and sat on a nearby bench and prayed. 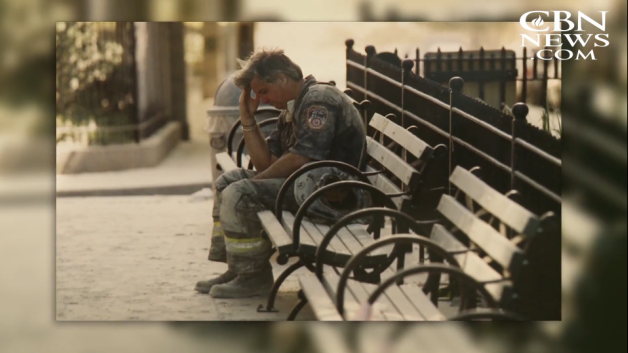 It was at that moment that an Associated Press photographer snapped a photo of him, a photo that would be seen around the world.
“I’m praying to Jesus, praying for clarity…  ‘What do You want me to do?  What should I do?'” Dan explained in reference to the photo.
Dan believes Jesus directed him to go back to the apartment. It was there the phone rang.
His father was crying and called to check on Dan. He also told Dan where Jean was, and Dan was on his way.
“I saw her standing there, and she’s all upset, and she looked at me kind of wide-eyed, ‘What are you doing here?’  Like that,” Dan said.
“In he walks in his bunker gear, covered, and his eyes were blood red,” Jean said. “There was just blood in his eyes, and I said, ‘Where were you?'”
“He said, ‘You don’t want to know,’ and we hugged. It was just unbelievable,” she recalled. “We are so grateful for what Jesus has done in our life.”
All Is Grace
Jean chronicles the couple’s amazing story of survival in the book, By the Grace of God, A 9/11 Survivor’s Story of Love, Hope, and Healing.
“He was with all of us that day, and I don’t want people to think that we were so special because we were saved,” Jean said. “I mean it wasn’t our time, and He was with those who were passing over, and it’s just a great privilege to speak about Him.”
Life has been tough at times following 9/11. The Potters have dealt with post-traumatic stress disorder, and Dan had to retire as a firefighter because of the injuries he suffered on Sept. 11, 2001.
Yet, in spite of the attacks and the difficulties that have followed, the faith of Jean and Dan remains strong. They hope those who read and hear their story will also trust in God.
“God is a loving God,” Jean shared. “If you turn over your pain to Him, He will pull you through it. He will heal your heart.”
“I trust Him implicitly, and I give Him my life with that…’Use me for Your glory, and whatever I can do for You,'” Dan said, praying at the same time.
After living in Pennsylvania for a season, Dan and Jean are back in New York, enjoying life in a small town.
“Once again, Jesus brought us to a new place of blessing,” Jean wrote to CBN News. “We are finally home, and it feels wonderful.”
Dan has done some emergency planning for residents there, and Jean is writing again.
She’s writing about another example of the Lord’s faithfulness during a time of tragedy. Jean’s mother passed away in 2016. She survived surgery, but died 17 days later.
“(The Holy) Spirit guided me once again through the most awful, painful days of my life,” she shared with CBN News. “At every turn, every moment I was guided with every decision. It was unbelievable.”
Watch video here: Jean Potter
Love For His People, Inc. founded in 2010 by Steve & Laurie Martin. Charlotte, NC USA