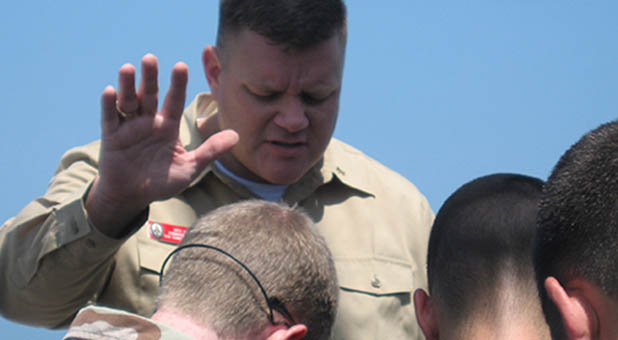 Navy chaplain Lt. Cdr. Wes Modder (ret.) is ready for the next chapter in his life following his retirement with full honors. (First Liberty Institute photo)

EDT 9/7/2016 BOB ESCHLIMAN  charisma news
U.S. Navy Lt. Cdr. Wes Modder once ministered to and counseled Special Operations warriors who defended America’s freedom every day, but when the decorated Navy chaplain and former Marine faced a dishonorable discharge for simply doing his job, he needed a different kind of warrior on his side.
First Liberty Institute stepped in to defend Modder’s religious freedom in a firestorm of controversy that caught the attention of the nation’s media and political leaders. And, in the end, he was able to declare victory.
Tuesday, Modder’s 21-year military career came to an end, not as a result of a court martial, or dishonorable discharge, but with a retirement ceremony held aboard U.S.S. Midway. He also received the Navy & Marine Corps Commendation Medal for meritorious service to his country.
“I am so honored and humbled to have had the privilege of serving my country for the past 20 years,” he said. “After such a difficult season, I am grateful to retire from the U.S. Navy with a clear and honorable record.”
It could have ended very differently, though.
Modder, who served as Force Chaplain for Navy Special Warfare Command, came under fire after a few sailors objected to the biblical views he expressed during private counseling sessions. In response, the Navy removed him from his unit and threatened to end his career.
Attorneys for First Liberty Institute, however, escalated the case to the highest levels of the Navy’s command structure. As a result, the charges against Modder were dismissed and he was restored to full active duty.
“Chaplain Modder’s victory was a not just a victory for him, but for everyone who serves in our military,” First Liberty President and CEO Kelly Shackelford said.
Modder’s next “duty station” will be Stone Church in Chicago, where he was recently hired to serve as lead pastor. He said he’s excited about this latest opportunity the Lord has presented to him.
“I look forward to continuing to follow God’s calling to champion the cause of religious liberty for every American.”