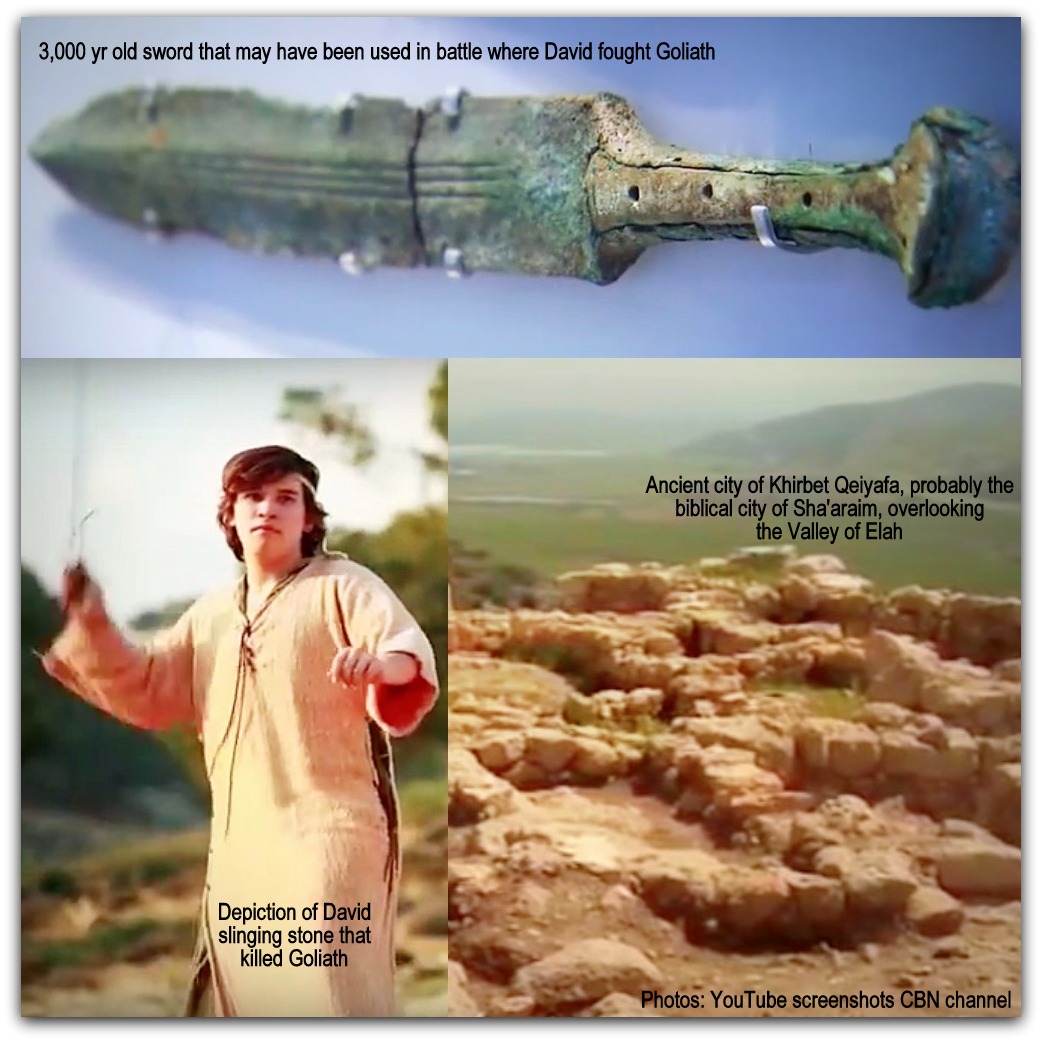 RELICS FROM THE CITY WHERE DAVID FOUGHT GOLIATH

by  Efrat Forsher
JERUSALEM JOURNAL
Artifacts from an ancient city near the Valley of Elah open up a window to the time – and place – where David fought Goliath and killed him with a single stone. Swords on display could have been used in the battle.
✡✡✡✡✡✡✡✡✡✡✡✡✡✡✡✡✡✡
The Bible Lands Museum (BLM) in Jerusalem is inaugurating a new exhibition next week featuring unique artifacts from Khirbet Qeiyafa, an ancient Judean city that may have played a key role in the famous biblical battle between David and Goliath.
BLM has named the exhibition “In the Valley of David and Goliath.” The biblical reference is to the Elah Valley lying below Khirbet Qeiyafa, where the famous battle between the Israelites and Philistines took place.
The museum’s website asks:
Who lived in this anonymous city when it was first built, during the time of King David?
Could we have found the biblical Sha’araim – literally the city of two gates, mentioned in the Bible in the description of the battle between David and Goliath?
According to BLM, the exhibition will include “original finds from the city’s ruins, its structures, gates, dwellings and many other remarkable artifacts.” Visitors will also get to see up close a famous Hebrew inscription, portable shrines — referred to as “shrine models” by archeologists — and three iron swords.
The city, which lies close to modern day Beit Shemesh, near Jerusalem, is believed to have been inhabited by the ancient Israelites during the time of King Saul. The long archeological excavations on the site have provided some of the strongest evidence that ancient Israelites lived in the area at the end of the 11th century BCE.
Archeologists say that swords at the site could have been used during the battle of David and Goliath.
✡✡✡✡✡✡✡✡✡✡✡✡✡✡✡✡✡✡
This is a lightly edited version of the original article published by Israel Hayom at http://www.israelhayom.com/site/newsletter_article.php?id=36041
Love For His People, Inc. founded in 2010 by Steve & Laurie Martin. Charlotte, NC USA

“Come and Celebrate With Us” ✡ Fabulous Chalk Art in Jerusalem – ISRAEL365

Why a Trump Win Is Critical to the Survival of Christian Faith and Values – Steve Strang, Strang Report

Wednesday, August 12, 2020        Why a Trump Win Is Critical to the Survival of Christian Faith and ValuesDoug

Time To Act. The Lord’s Will For Your Life. The latest book by Steve Martin

LoveMusic! – Chris Tomlin – Nobody Loves Me Like You (Official Music Video)