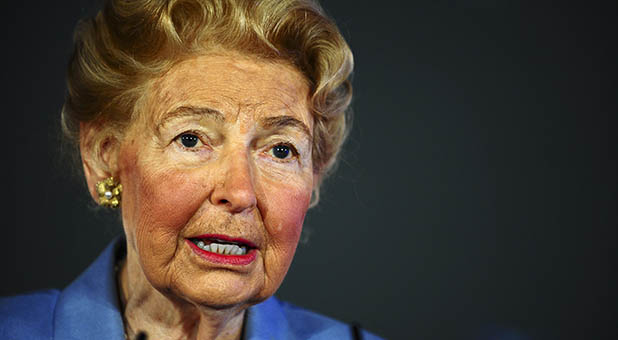 Conservative Icon Phyllis Schlafly Goes to be With the Lord

9/6/2016 BOB ESCHLIMAN  CHARISMA NEWS
There are few who, in their lifetime, have done more to advance the conservative, founding principles of America than Phyllis Schlafly.
Monday, the 92-year-old grassroots activist and organizer, who had dedicated more than 70 years in public service passed away at her family home in Saint Louis, Mo. The Eagle Forum, which she founded to advance a Christian, pro-family, pro-life agenda, made the following announcement.
An iconic American leader whose love for America was surpassed only by her love of God and her family, Phyllis Schlafly, an indomitable pro-family grassroots advocate and organizer, was 92 years old. Mrs. Schlafly was preceded in death by her beloved husband Fred and is survived by six children along with 16 grand and 3 great grandchildren.
Phyllis Schlafly spent an astounding 70 years in public service of her fellow Americans. Her focus from her earliest days until her final ones was protecting the family, which she understood as the building block of life. She recognized America as the greatest political embodiment of those values. From military superiority and defense to immigration and trade; from unborn life to the nuclear family and parenthood, Phyllis Schlafly was a courageous and articulate voice for common sense and traditional values. She authored 27 books and thousands of articles. She spoke tens of thousands of times across the United States.
Her joy in life was evident to all through her smile and wit. Funeral arrangements are pending.
Among the first to respond to the announcement was Republican presidential nominee Donald Trump, who said he had just spoken with Schlafly directly a few days prior to her passing. He said:
“Phyllis Schlafly is a conservative icon who led millions to action, reshaped the conservative movement, and fearlessly battled globalism and the ‘kingmakers’ on behalf of America’s workers and families. I was honored to spend time with her during this campaign as she waged one more great battle for national sovereignty. I was able to speak with her by phone only a few weeks ago, and she sounded as resilient as ever.
“Our deepest prayers go out to her family and all her loved ones. She was a patriot, a champion for women, and a symbol of strength. She fought every day right to the end for America First. Her legacy will live on in the movement she led and the millions she inspired.”
Family Research Council President Tony Perkins was also among the very first to respond to Schlafly’s passing. He noted that she would be remembered most for her “courageous leadership in the face of seemingly insurmountable odds.”
“With the political establishment, the media, and academia all arrayed against her, she organized a grassroots movement that not only stopped the Equal Rights Amendment but became the foundation for the pro-life, pro-family movement we have today,” he said. “I have little doubt that the political and cultural landscape of America today would have long ago been devoid of true conservatism if not for her leadership. She never surrendered her principles and she never gave in to intimidation.
“Her love for God and this country drove her to fight for the Constitutional principles that founded this nation. We honor Phyllis for the lessons that she taught us all. I’m proud to have stood alongside her for faith, family and freedom.”
Former Arkansas Gov. Mike Huckabee, was among the many American politicians who was influenced at an early age by Schlafly’s seminal work, A Choice, Not an Echo, a book that launched the conservative grassroots political movement. He later had a chance to develop a personal friendship with her.
“She was brilliant, tough, tenacious, and driven by absolute adherence to principle and not to personalities,” he wrote in a statement on social media Monday night. “I will miss her personally, but the conservative cause has lost its matriarch. And there is no one even close to replacing her. God bless you Phyllis, for changing the world!”
Students for Life of America President Kristan Hawkins was among the many conservative women influenced by Schlafly, and later became a close personal friend of the constitutionalist icon. She told Breitbart News on Monday night that Schlafly was one of her personal heroes and mentors, who “inspired millions to the fight against abortion and the disastrous Equal Rights Amendment which would have made abortion a constitutional right.”
“Phyllis is the reason the Republican Party is a pro-life party,” she said. “Phyllis will be missed yet her legacy will live on through my generation and in the young women who are fearless in the fight for the lives of the preborn and their mothers on their campuses and in their workplaces and communities.”