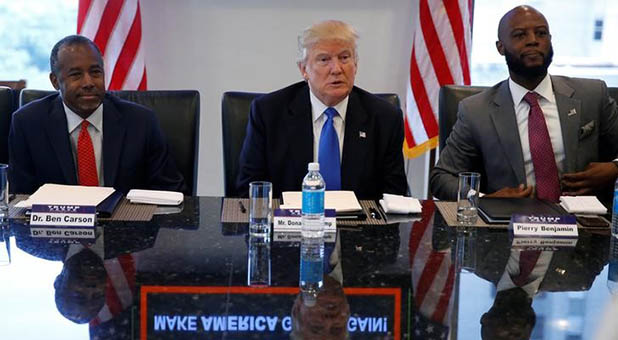 Here’s What Day Gardner Has to Say About Donald Trump
8/26/2016 DAY GARDNER/NATIONAL BLACK PRO-LIFE UNION  CHARISMA NEWS
It has finally happened. The Republican nominee for the highest office in the land is reaching out to Black Americans and actually asking for our vote.
The Democratic Party has had its talons plunged deep in the flesh of black Americans for eons. Their playbook promises are the same every election season and include: the promise of funding for education, yet schools are still failing and others continue to close in the poorest minority neighborhoods throughout the country; funding for big government handouts which keep minorities dependent on the big government “plantation”; and continued funding for abortion—the number one killer of blacks which decimates the black community as a whole.
Wasn’t it Democrat President Lyndon Baines Johnson who said: “These Negroes, they’re getting pretty uppity these days and that’s a problem for us since they’ve got something now they never had before, the political pull to back up their uppityness. Now we’ve got to do something about this, we’ve got to give them a little something, just enough to quiet them down, not enough to make a difference … “
Guess what? Whether this is an actual LBJ quote or not, the bottom line is, that’s exactly what the Democrats have been doing for over 50 years! They drop a crumb here, a rotten potato peel there—just enough to keep us sniffing around like dogs. We wag our tails while lapping up the crumbs—and all is well until the next election season.
The Democratic machine has blacks exactly where they want us, tucked snugly in their back pockets where they can sit on our votes year after year, tossing stale crumbs out to us while offering fresh loaves to potentially “new” voting blocks.
The result of failed policies can be seen in every Democrat controlled city across America where families are devastated and jobless—poverty, crime and violence are rampant.
It’s infuriating that in this high tech day and age, many of my black brothers and sisters are of a “Stepford” mentality, sleepwalking in a politically robotic-like existence. I want to shake them and say wake up, smell the roses and the coffee! Stop voting for the same old politicians while hoping for different outcomes—face it … it’s not working!
My 87-year-old mother was a life-long Democrat and Obama supporter, but this coming election, she has decided to forgo the usual crumbs strewn by Democrats, opting for porterhouse instead.
This November, my courageous mother will cast her vote for Donald J. Trump for President and I will be right there beside her.