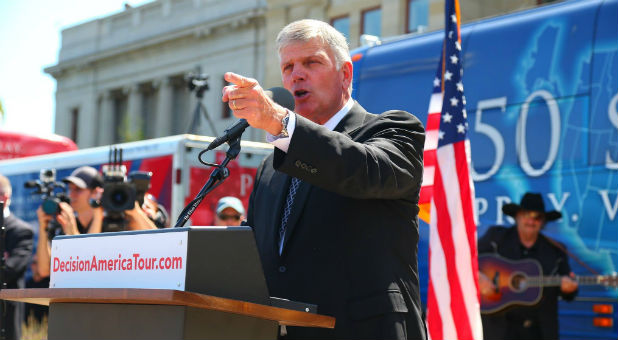 8/22/2016 JESSILYN JUSTICE  CHARISMA NEWS
Join us on our podcast each weekday for an interesting story, well told, from Charisma News. Listen at charismapodcastnetwork.com.
Evangelist Franklin Graham speaks the truth boldly but in love. He refuses to gloss over sin and the slow creep of immorality in our culture.
But these statements have made Graham a few enemies.
“Rev. Graham is a polarizing figure … His ungracious and bigoted remarks have the potential to generate serious negative impact on the Christian witness in Vancouver,” some Canadian church letters wrote in a letter.
Graham is expected to lead the Festival of Hope, scheduled for next March in Vancouver.
“God has already brought thousands of Canadians of all ages to His Son through BGEA outreach events in numerous Canadian cities. Your prayers and partnership in the Greater Vancouver Festival of Hope are tools He can use to continue His work,” according to the Festival’s website.
But five major faith leaders, including the Archdiocese of Vancouver, oppose Graham’s evangelistic gathering.
“We … denounce the frequent incendiary and intolerant statements made by Rev. Graham, which he unapologetically reiterates,” the letter reads.
Some of those statements include denouncing homosexuality as a sin and calling transgender people to use the bathroom of the birth-assigned sex, not their choice.