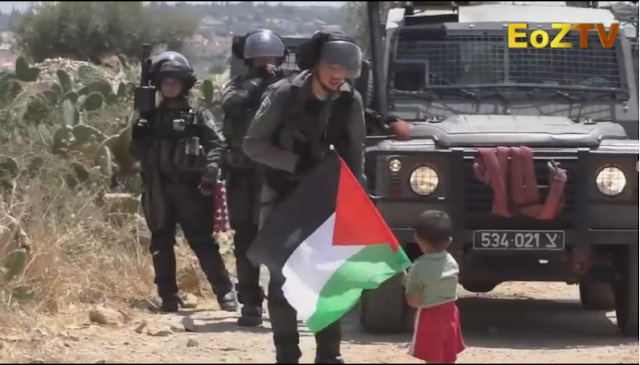 This Video Epitomizes the Israeli-Palestinian Conflict

Israelis, including Prime Minister Benjamin Netanyahu (see below), were horrified by a video clip posted to the Internet showing a Palestinian father trying to get his 4-year-old son to attack an Israeli soldier in hopes that the soldier would respond with violence and thereby bolster claims that Israelis are violent racists.
Instead, the soldier responded with kindness, and the oblivious toddler instead threw stones into the nearby field.
The exchange epitomized perfectly the Israeli-Palestinian conflict. Most Israelis just want peace, while far too many Palestinians have been brainwashed into believing the Jews are enemies that must be violently confronted.
The words of former Israeli Prime Minister Golda Meir have never rung so true:
“Peace will come when the Arabs will love their children more than they hate us.”
Watch here: Palestinian Child
Want more news from Israel?Click Here to sign up for our FREE daily email updates
Love For His People, Inc. founded in 2010 by Steve & Laurie Martin. Charlotte, NC USA